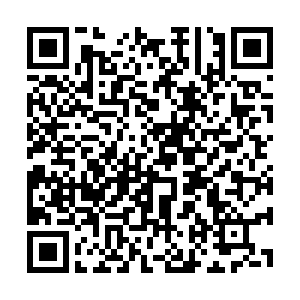 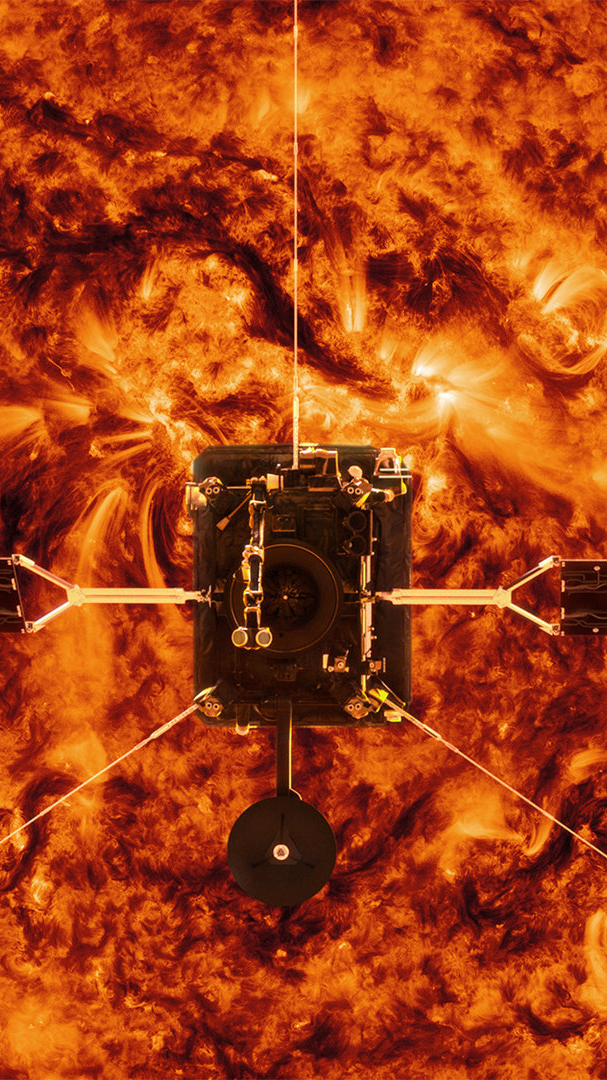 The European Space Agency (ESA) has embarked on a groundbreaking mission to the Sun with the launch of its Solar Orbiter probe on Monday.

Using an array of advanced sensors, the spacecraft will provide unprecedented close-up observations of Earth's nearest star and beam images of its polar regions for the very first time.

A collaboration between ESA and NASA, the Solar Orbiter flew into space with the help of an Atlas V411 rocket after launching on 10 February from Cape Canaveral, Florida, in the U.S.

Bristling with cutting-edge technology, sourced from across Europe, the satellite has four in-situ instruments, "touching" the environment outside and six high-resolution remote sensing imagers to observe and map the Sun.

The Solar Orbiter will take advantage of the gravitational force of Earth and Venus to reach its destination in a little under two years. More popularly known as the slingshot maneuver, the gravity-assisted flybys will help to raise the orbital plane around the Sun by 34 degrees, thus bringing the polar regions into view. 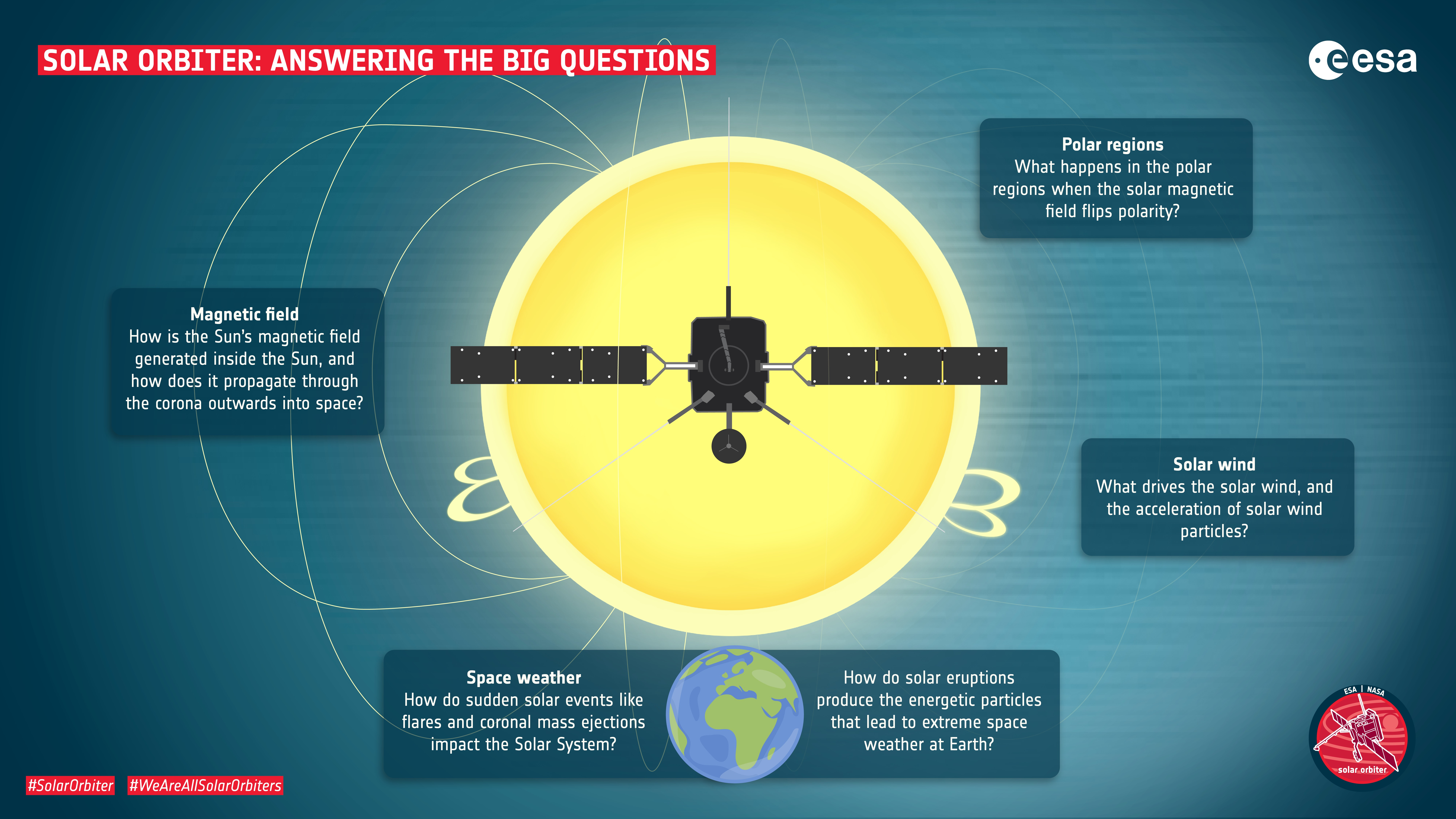 David Berghmans, a scientist at the Royal Observatory of Belgium, underscored the importance of the mission.

"A spacecraft like Solar Orbiter has never been flown before.

"There have been space missions in the past that flew out of the orbital plane of the planets or that dived into the inner solar atmosphere but none of them have done both at the same time, and with such a versatile set of high-quality instruments on board as the Solar Orbiter."

The Royal Observatory of Belgium is going to operate one of the bigger imaging telescopes on the Solar Orbiter, the Extreme Ultraviolet Imaging Telescope. 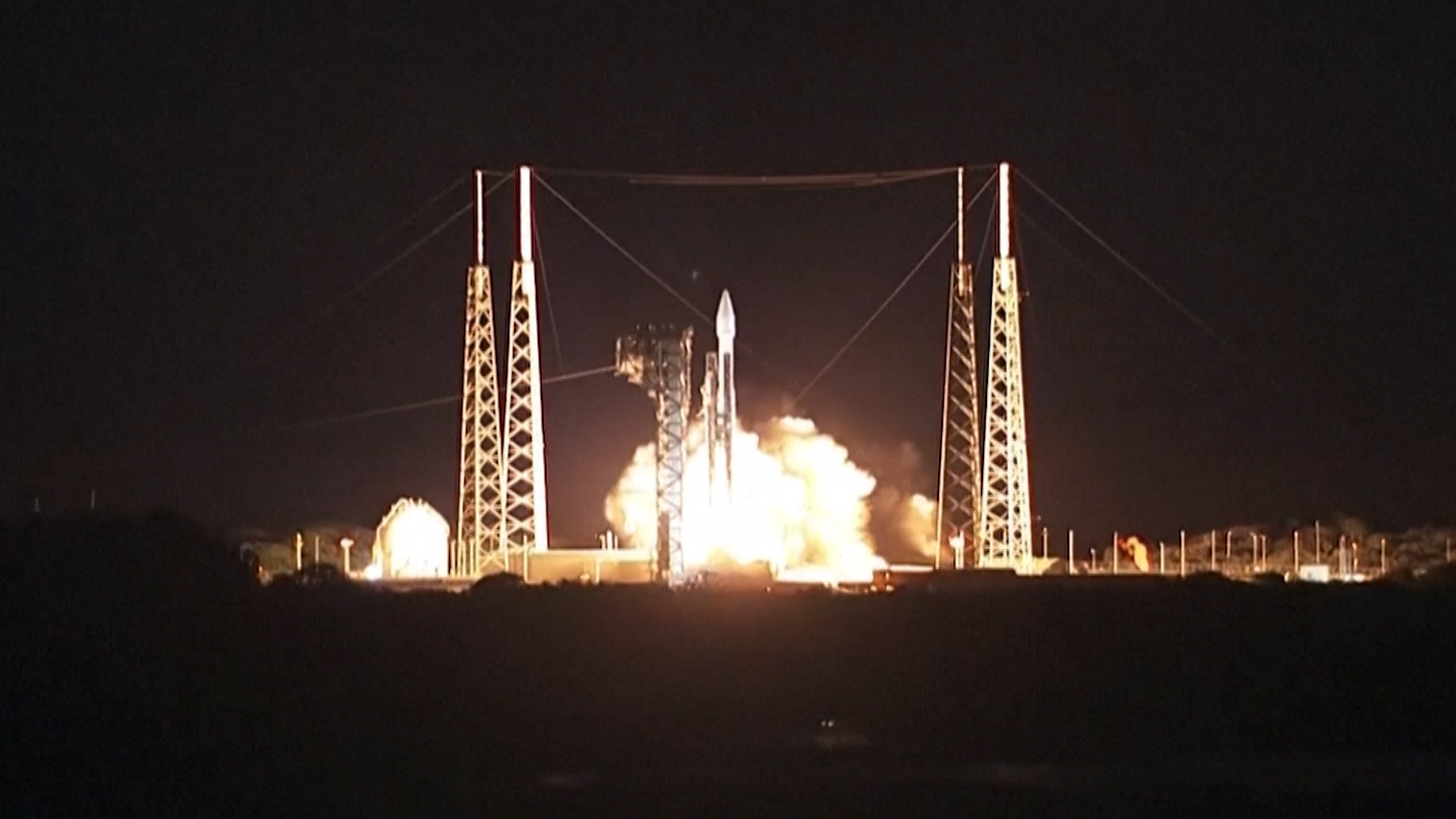 The Solar Orbiter spacecraft launched aboard an Atlas rocket from Cape Canaveral in Florida on Monday at 04:03 GMT. (Credit: ESA/AFP)

The Solar Orbiter spacecraft launched aboard an Atlas rocket from Cape Canaveral in Florida on Monday at 04:03 GMT. (Credit: ESA/AFP)

The Solar Orbiter will attempt to answer some big questions in space science, including how the Sun creates and controls the heliosphere – the giant bubble of plasma that surrounds the Solar System and influences the planets within it.

The project aims to concentrate on four areas of interest – the polar regions, space weather, solar wind and the Sun's magnetic field.

An understanding of the magnetic field and solar wind will help explain how space weather interferes with communication systems on Earth and the International Space Station.

Barbara Negri, head of exploration and observation of the Universe at the Italian Space Agency, which has funded three payload instruments, said: "The main objectives of the mission are to understand how and where the solar wind plasma and the magnetic field originate in the corona; how solar transients, like flares and coronal mass ejections, drive the heliospheric variability and produce energetic particle radiation; and how the solar dynamo works and drive connections between the Sun and the heliosphere." 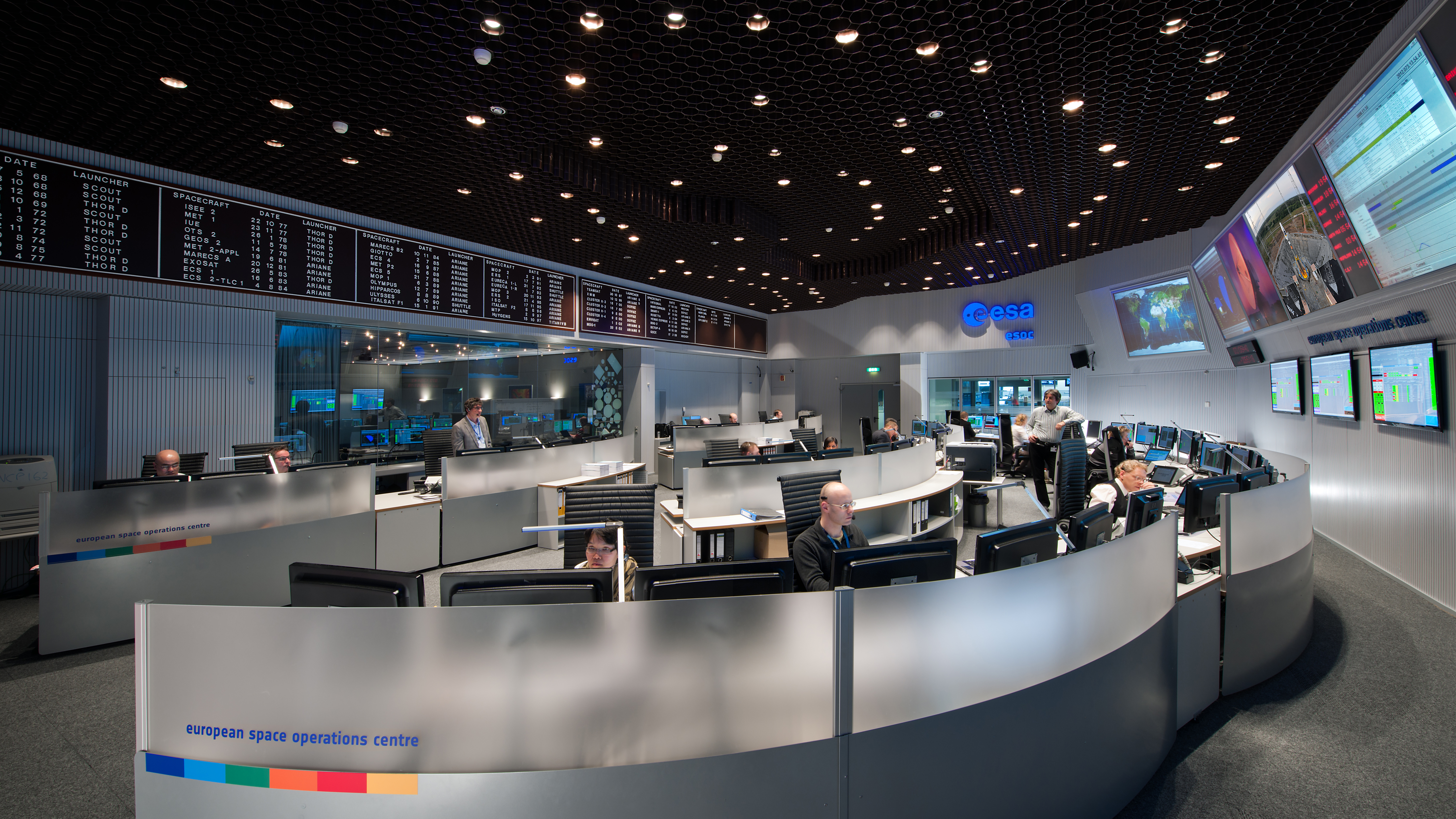 The Solar Orbiter programme is a multi-agency initiative that includes ESA, NASA and many other entities spread across Europe (Credit: ESA)

The Solar Orbiter programme is a multi-agency initiative that includes ESA, NASA and many other entities spread across Europe (Credit: ESA)

Shedding light on the origins of the ESA initiative, Miho Janvier, an astrophysicist at France's Institut d'Astrophysique Spatiale, added: "This project was proposed within the ESA M-class mission proposal round.

The Institut d'Astrophysique Spatiale has significant involvement in the Solar Orbiter program. It has contributed to three remote sensing instruments out of the six on board, the Polarimetric and Helioseismic Imager, the Spectral Imaging of the Coronal Environment instrument and the Extreme Ultraviolet Imaging Telescope.

Carsten Henselowsky, Solar Orbiter project leader from the German Aerospace Center (DLR), stressed the value of the knowledge that will be gathered to provide an enhanced understanding of the inner workings of the Sun.

"Solar Orbiter is primarily a mission for fundamental physics. Therefore, practical applications are not the main goals.

"Nevertheless, a better knowledge of solar physics will be a key factor for understanding space weather and its implications on Earth and maybe allow us to issue forecasts in the future."

It is not only the scale and complexity of the mission that will keep scientists and technicians glued to their screens – Solar Orbiter will be operating in one of the most extreme environments known to mankind. 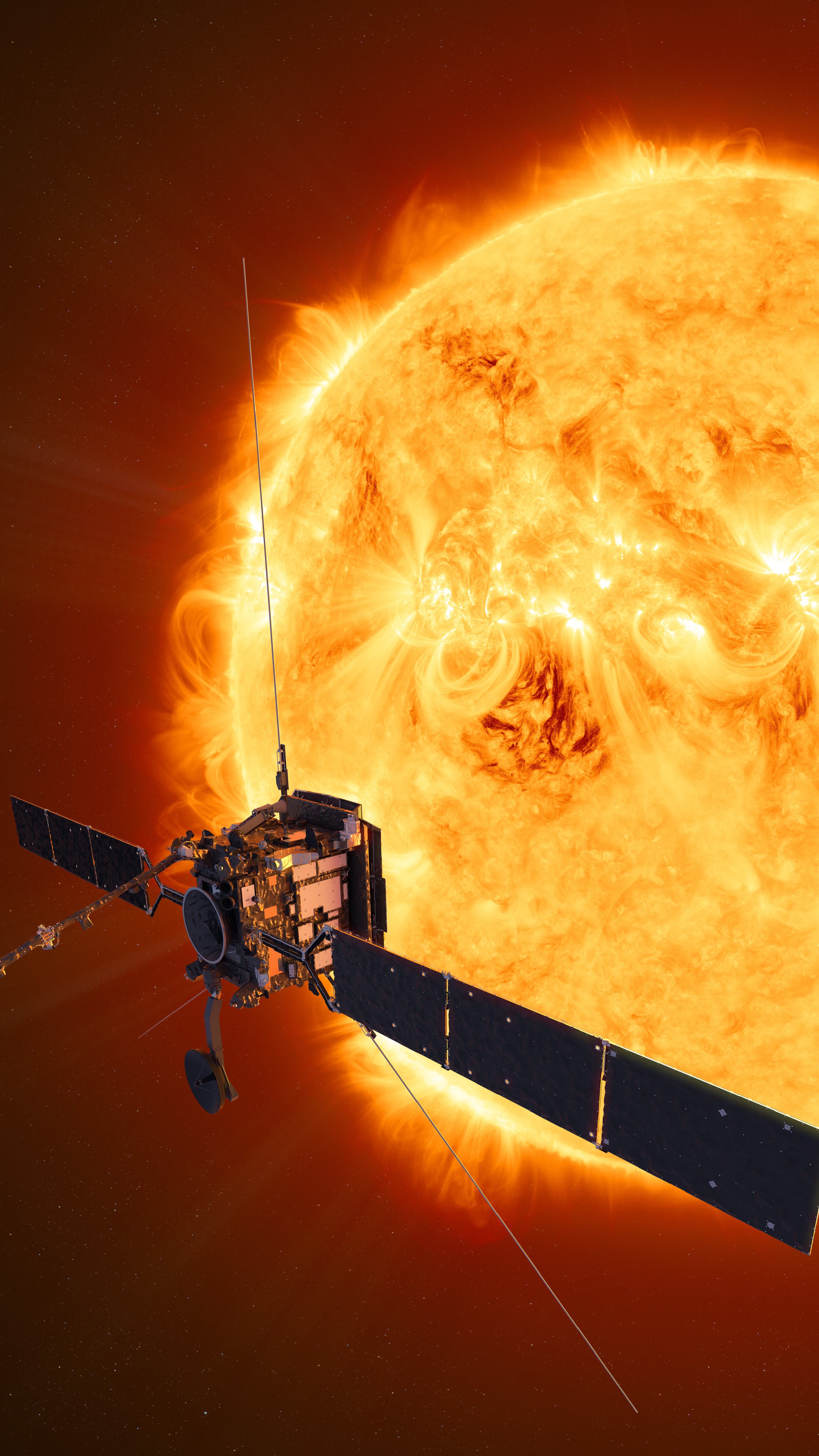 At its closest approach, approximately 42 million kilometers from the Sun, it will be just over a quarter of the way between the Earth and the Sun and well inside the orbit of Mercury.

The spacecraft will be exposed to sunlight 13 times more intense than that experienced by satellites orbiting Earth. It must endure powerful bursts of particle radiation from explosions in the solar atmosphere.

Its survival will solely depend on the integrity of the probe's heat shield, which has been designed to withstand temperatures of up to 500 degrees Celcius. Small sliding doors with heat-resistant windows will allow sunlight to reach the highly delicate instruments located directly behind the protective heat shield.

But the Solar Orbiter won't be alone in toiling under such brutal conditions. Launched in 2018, NASA's Parker Solar Probe is on a seven-year mission to study the Sun's immediate environment. It will gradually come within six million kilometers of the star – the closest a space vehicle has ever come to the Sun.

According to NASA, "flying into the outermost part of the Sun's atmosphere, known as the corona, for the first time, Parker Solar Probe will employ a combination of in-situ measurements and imaging to revolutionize our understanding of the corona and expand our knowledge of the origin and evolution of the solar wind.

"It will also make critical contributions to our ability to forecast changes in Earth's space environment that affect life and technology on Earth."

The Solar Orbiter will be operating in one of the most extreme environments known to mankind. (Credit: ESA)

The Solar Orbiter will be operating in one of the most extreme environments known to mankind. (Credit: ESA)

"Parker Solar Probe will perform its scientific investigations in a hazardous region of intense heat and solar radiation. The spacecraft will fly close enough to the Sun to watch the solar wind speed up from subsonic to supersonic, and it will fly though the birthplace of the highest-energy solar particles," the U.S. space agency added.

The Solar Orbiter will work in tandem with the Parker probe to cultivate data and provide never-before-seen imagery of the Sun that neither could have accomplished if they had operated on their own.