Global Business Daily: Ghosn in his own words, Uber, and working from home
Patrick Atack in London 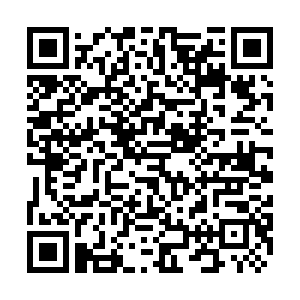 "My lawyers said, 'we were sure he would not have a fair trial, but we knew with the evidence we have, he would be acquitted'"

What propelled Carlos Ghosn to made a sudden and imaginative exit from Japan? It wasn't the advice of his advisers, it seems. Our weekly talk show Agenda went to Lebanon to interview the former Nissan boss, now on the run from Japanese authorities. You can watch the full show this Saturday at 16:30 GMT.

Today we also heard from correspondent Ross Cullen in Paris, who sent a report about the businesses winning a demand for face masks skyrockets as coronavirus fears heighten. You can watch his report in today's briefing.

Further afield, in Brazil, a case involving Uber may cause ripples around the world, as one of the app's drivers has lost a case over whether or not drivers are employees. Keep an eye out for more cases along those lines.

Some of you are probably reading this on your commute, but workers and employers are increasingly happy for work to be done at home, or at least not in the office. At the bottom of today's email we take a look at how the numbers compare across the EU. There's quite a gap between the top and bottom nations.

Finally, remember to keep spreading the word about Global Business Daily - you can recommend your friends and colleagues sign up here.

China announced it will cut tariffs on $75 billion worth of U.S. imports. 10% tariffs on U.S. goods would be cut to 5%, while other goods that have faced 5% levies will have those cut to 2.5%, from February 14.

BMW will up its capitacity to make drivetrain parts for electric cars at its Dingolfing plant, creating 600 jobs in southern Germany.

French oil giant Total beat expectations and kept Q4 profits up at $3.2 billion. It had been predicted low oil prices would hurt the firm, but instead shareholders will be rewarded with an increased dividend of between five and six percent.

Deutsche Bank announced Capital Group as a new shareholder. The Los Angeles-based firm now holds one of the biggest stakes in the German bank, at 3.1 percent.

In what may turn into an important global ruling, Uber has won a case brought by a driver in Brazil. A federal judge in Brasilia sided with the ride hailing app over a driver from Sao Paulo, saying drivers are not employees because they can turn off their phone and disconnect immediately from the company.

Hermes, the French brand known mainly for its luxury handbags, says it will start selling make-up from March. Its competitors in the cosmetics field will include brands like Chanel, as it targets the top end of the market.

BlackRock has called out Siemens for the German firm's $19 million part in the Carmicheal coal mine in Australia. BlackRock, the world's largest asset management firm, said Siemens had failed to consider the "breadth of risks" associated with the deal.

Volvo Car Group, still based in Sweden but owned since 2010 by China's Geely, reported 2019 sales up by nearly 10 percent. The firm said sales of SUVs had been particularly good.

As fears over coronavirus grow, so has the demand for protective face masks. In France, some pharmacies have sold out and factories making them have gone on a recruitment drive to try to meet soaring demand. Ross Cullen reports. 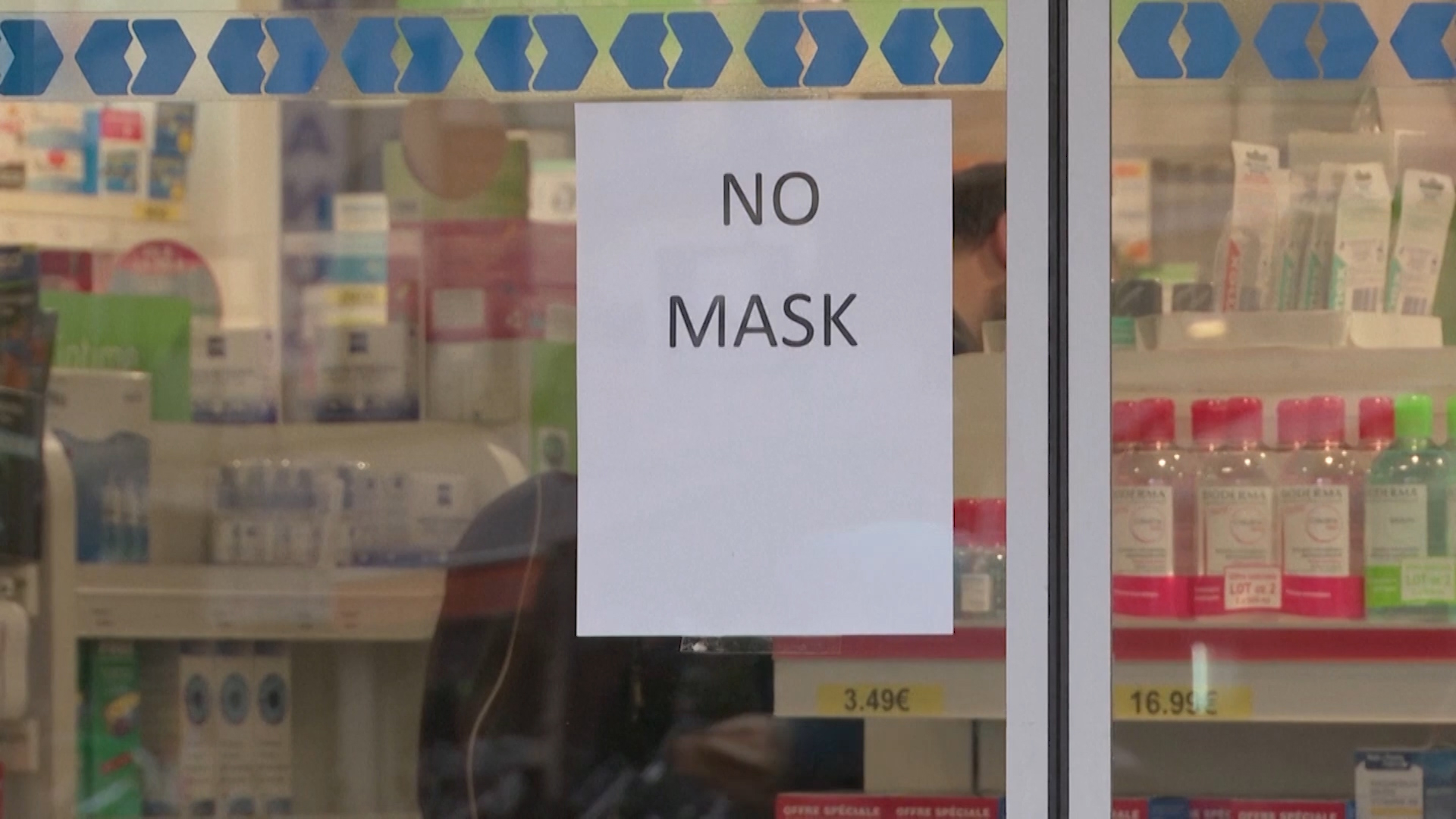 The ambition is there. You can see that quite clearly from the United Kingdom government.

Abhinay Muthoo is a Professor of Economics at the University of Warwick, he spoke to CGTN from central London, responding to a speech by UK foreign minister Dominc Raab in Australia.

What do you think the foreign secretary would achieve on his trade mission?

Just to put that in context, as he said, the United Kingdom has left the EU and it is now in a new world. And the prime minister gave a speech about his vision for the United Kingdom in this new world. The hardest negotiations will be the ones in the coming months with the European Union. In that context, his foreign minister, Mr. Raab, is on a trip to try to establish trade deals with the countries [outside the EU]. He's currently in Australia. The noises coming out at the moment are favorable in terms of Australians wanting to have a deal with the United Kingdom.

And this is important for the UK in the EU negotiations context, because in order to establish their bargaining power in negotiations with the EU, they need to start urgently rather than later, to have some credible progress on these free trade deals with Australia and so on.

So he's in Australia, but of course, there are lots of conversations going on around trade all around the world. Well, what do you think? Is it the UK's position, how they're positioning themselves?

It's a new player, if you like, on the world stage and it's ready to make ambitious deal on foreign trade, a free trade agreement with these countries, which wasn't possible until now.

So the moment is the conversations around how can we have a conversation? I think what's important is that over the coming months there's some credibility in the progress with Australia, with China, with the U.S., with Singapore and so on. So we had the right conversation, the right language, and the vision is being painted. But it's early days actually to say what the agreements with Australia and so on will look like. The ambition is there. You can see that quite clearly from the United Kingdom government's point of view.

Well, Boris Johnson's trade plans don't seem to include the EU's calls for a living level playing field. What you think about that?

So one of the things that the prime minister here, Boris Johnson, needs is the flexibility to make these free trade deals with other countries, the United States and China.

He has announced that he can't totally align himself with the EU rules, with EU regulations, as the European Union would want him to do. And that's going to be one sticking point in the negotiations with the EU over the coming months.

You need that flexibility to customize a trade deal with the US, with where we're with China and so on.

And that's the EU's worry, the UK having within this region an unfair competitive advantage by not aligning its rules with the European countries. And so that will be one of the interesting things that we'll see how it pans out over the coming coming weeks and months.

I mean, just give you an example. You know, the United Kingdom last week agreed for Huawei to in a limited way to help the UK with its 5G network. There may be lots of reasons for having done that and carefully considered. But one thing in terms of negotiations, it builds a rapport with China.

And in turn, it's going to increase the likelihood down the line a UK-China deal. And so that's quite a strategic maneuver on the part of the British government, and the prime minister. From that angle and it increases his bargaining power vis-a-vis the negotiations with the EU and other countries. 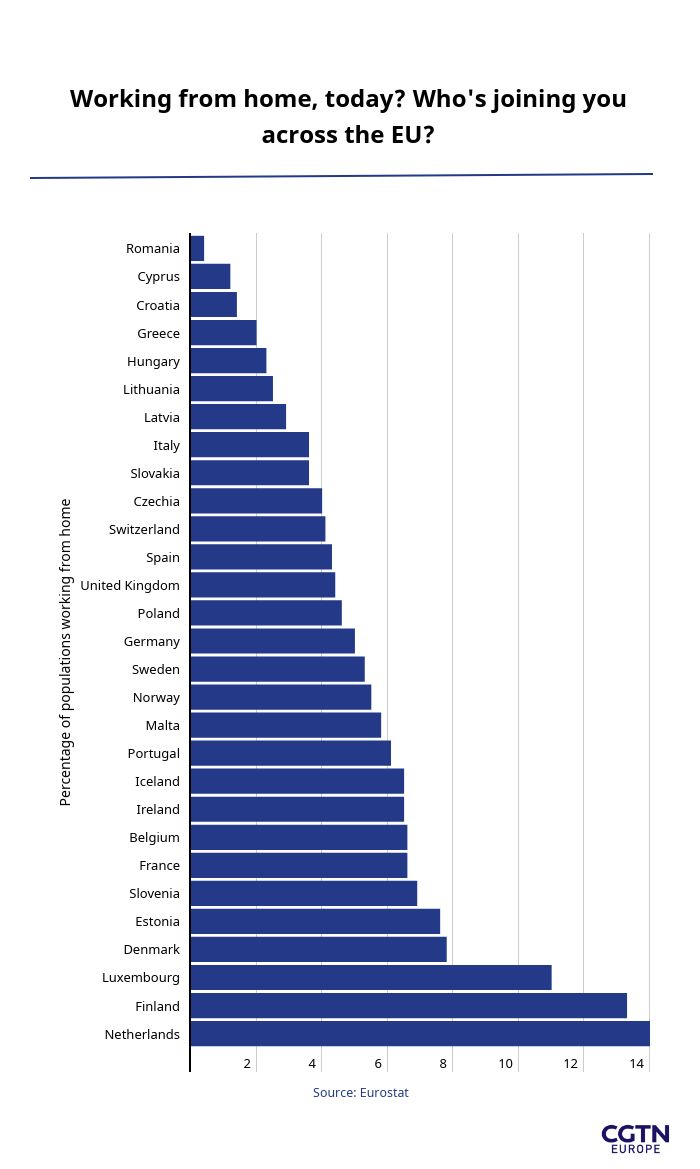 Newly released figures from the European Commission and Eurostat show which nations in the EU (and UK) had the most people regularly working from home in 2018. Finland and the Netherlands top the list, but Romania and Cyprus are at the other end. Fewer than 1 percent of Romanians frequently choose the laptop option.