I am not coronavirus: The protest of a young Chinese-Italian against xenophobia in Italy
Giulia Carbonaro Massimiliano Martigli Jiang was born in Wenzhou, China but moved with his parents to Italy when he was still a child. The 29 year-old grew up in Italy and considers himself as much Italian as Chinese.

On Sunday 2 February he took the streets of Florence's historical centre, where he lives, and stood for hours, blindfolded and wearing a face mask, next to a sign that said "I'm not a virus, I'm a human being: Eradicate the prejudice". 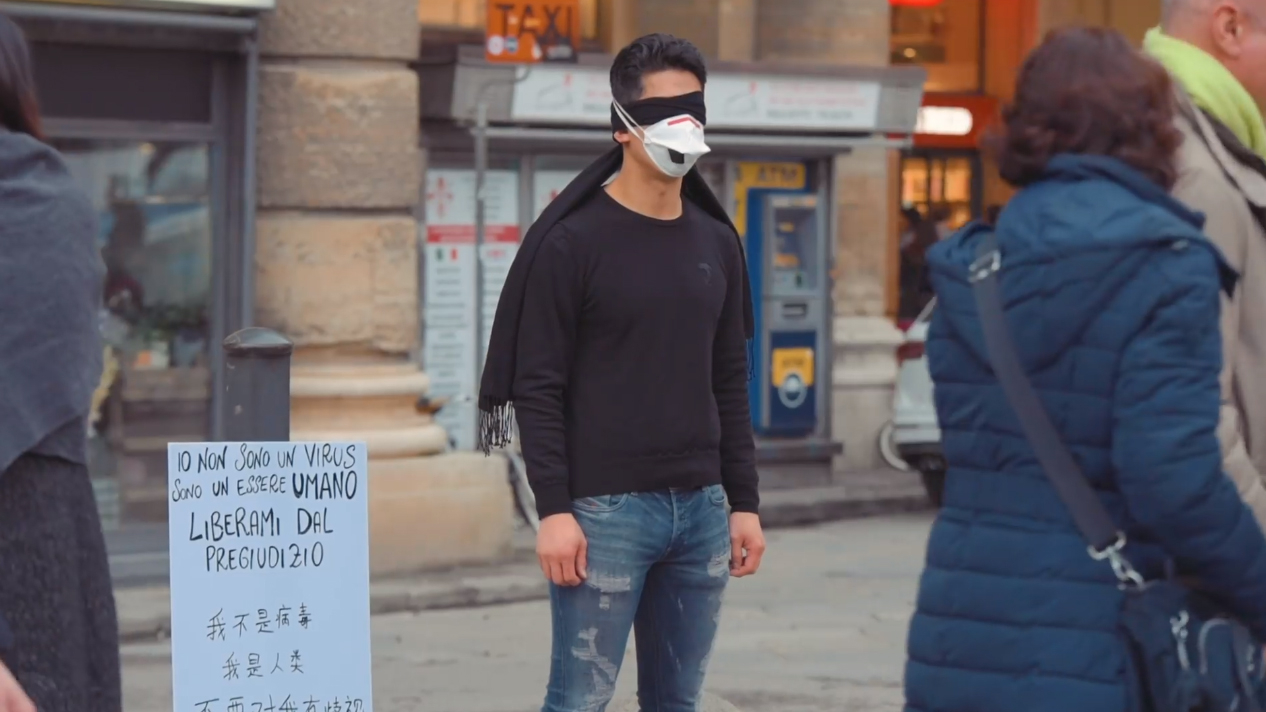 "The virus that's really scary right now is not coronavirus, but the prejudice in the air," said Jiang about his protest.

"Walk away from the virus, not the people. Prejudice is born out of ignorance."

The street stunt in Florence was designed to prove that people could still show human solidarity with the Chinese community. The Associazione Unione Giovani Italo Cinesi (Union of Young Italian-Chinese) launched the initiative after many episodes of racism against Chinese locals and tourists following the coronavirus outbreak.

The reactions of passerby in Florence were reassuring and encouraging. Most looked at Jiang with curiosity, many hugged him and even helped him remove his face mask and blindfold. Passerby in Florence hugged Massimiliano in solidarity with his protest over the racism affecting the Chinese community in Italy. (Credits: Associazione Unione Giovani Italo Cinesi)

Passerby in Florence hugged Massimiliano in solidarity with his protest over the racism affecting the Chinese community in Italy. (Credits: Associazione Unione Giovani Italo Cinesi)

Since the outbreak of coronavirus in China, panic has spread across Italy over fears of contagion.

Chinese restaurants across the country are empty, and Chinese nationals - both locals and tourists - have been the target of racism.

First came the case of a music school in Rome, the Santa Cecilia Conservatory, which suspended classes for all Chinese, Japanese, and Korean students unless they were tested for coronavirus. The decision of Santa Cecilia's director Roberto Giuliani was harshly criticized as discriminatory by the school's lecturers, who decided to stand against it.

Then images of a sign outside a cafe in front of the Trevi Fountain, in Rome, forbidding Chinese nationals to enter "due to security concerns" were shared online and raised awareness on the spreading discrimination against Chinese nationals in the country.

More incidents followed in Venice and Florence, where Chinese tourists were chased, insulted, and even spat on. A video that went viral in Italy shows a group of Chinese tourists walking along the Arno river in Florence being called "disgusting and dirty" by an unknown person off-camera. "Go coughing back to your country," says the man.

These incidents speaks of a spreading xenophobia in the country, a sentiment that far-right groups in the country are ready to jump on.

Neo-fascist party Forza Nuova has been sticking flyers to the windows of Chinese shops in Como and Brescia, in the northern region of Lombardia, saying: "Coronavirus? Shop Italian".

Ignazio La Russa, vice President of the Senate and member of far-right party Fratelli d'Italia, shared a tweet that encouraged the use of the fascist salute to avoid contagion via hand shake. The post was then deleted and public apologies followed the tweet, but the incident was enough to spark a discussion on what kind of environment is developing in Italy under the coronavirus hysteria taking shape in the country.

The Italian government has condemned all incidents against Chinese nationals and asked regional governors and citizens to trust that the authorities are taking the right measure to avoid contagion.