Hostility, horror and humor: How Europe's media reacted to Brexit
By Gary Parkinson 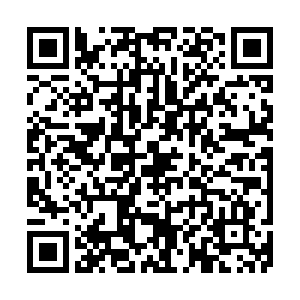 On Friday 31 January 2020, the UK officially left the European Union, ending 47 years and one month of participation in the continental project. As the dust settled, the media reactions across Europe have differed widely, dependent perhaps upon the media outlet's politics, the type of piece needing to be filed and the writer's own beliefs. 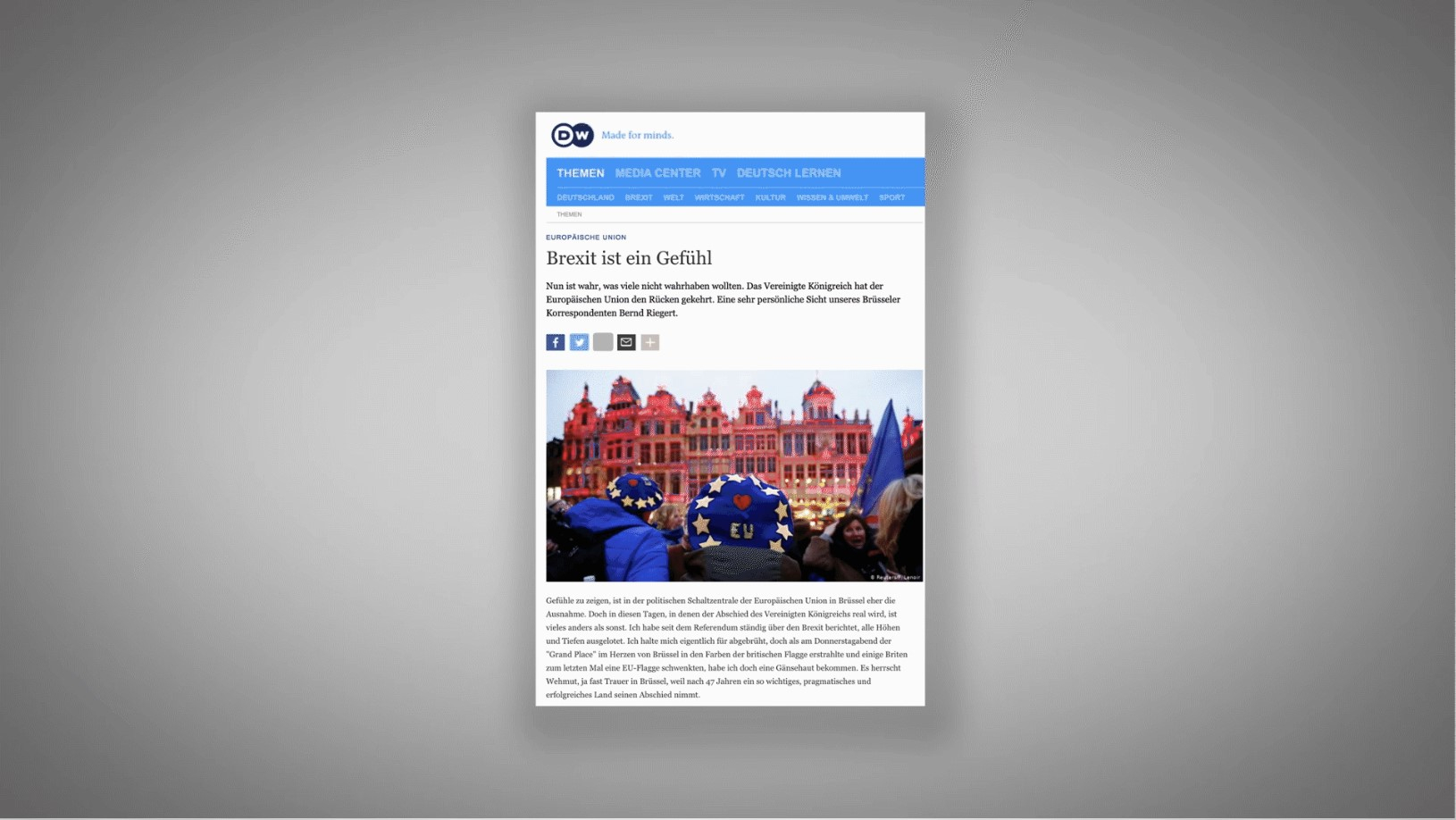 It's not just in Britain that Brexit can be a very emotive subject, and German state-owned broadcaster Deutsche Welle allowed its Brussels correspondent Bernd Riegert to speak directly from the heart.

"I generally consider myself to be hard-boiled," says the seasoned journalist, but the events of this week "gave me goosebumps. After 47 years, the departure of a country so pragmatic and successful was greeted with a sense of melancholy bordering on sorrow in Brussels."

With the sorrow comes confusion and anger. "Even after scores of discussions with Brexit supporters, I have never grasped what exactly the real-world advantages of isolation are supposed to be," writes Riegert. "For some politicians, Brexit is a type of religion, one with the built-in promise of salvation… Populism has won the day."

Slaloming through the stages of grieving, Riegert reaches the bargaining phase: "Reason will eventually return... when Britons see the UK's political influence wane… a return to the EU in 10 years' time is not impossible to imagine." In the meantime, concludes Reigert, "our British friends are chasing false promises and needlessly embarking on a perilous adventure — and that sends chills down my spine." 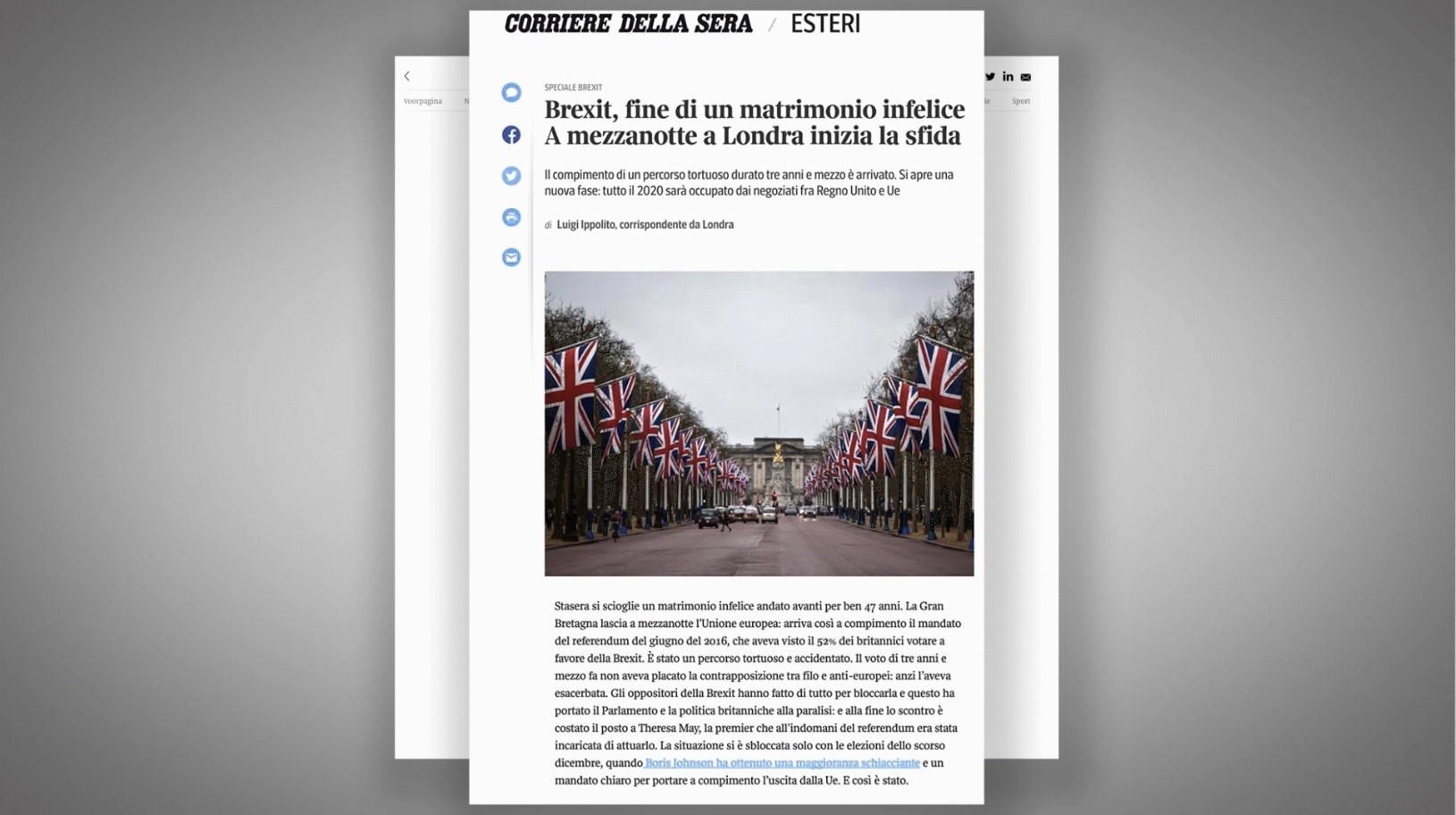 Italy: "The dissolution of an unhappy marriage"

"An unhappy marriage that has been going on for 47 years dissolved tonight," says Ippolito, focussing on those at the heart of the tug-of-war: the British public. "It was a tortuous and rough path. The vote of three and a half years ago had not allayed the opposition between the pro-European and the anti-European: on the contrary, it had exacerbated it."

Boris Johnson's election win finally gave his government "a clear mandate to complete the exit from the EU" but "the matter is not closed… the risk is that at the end of the year a dramatic and definitive break will materialize." Johnson must also face "the secessionist pressures of pro-European Scotland and the sirens of Irish reunification. In the end, the price to pay for Brexit could prove to be very high." 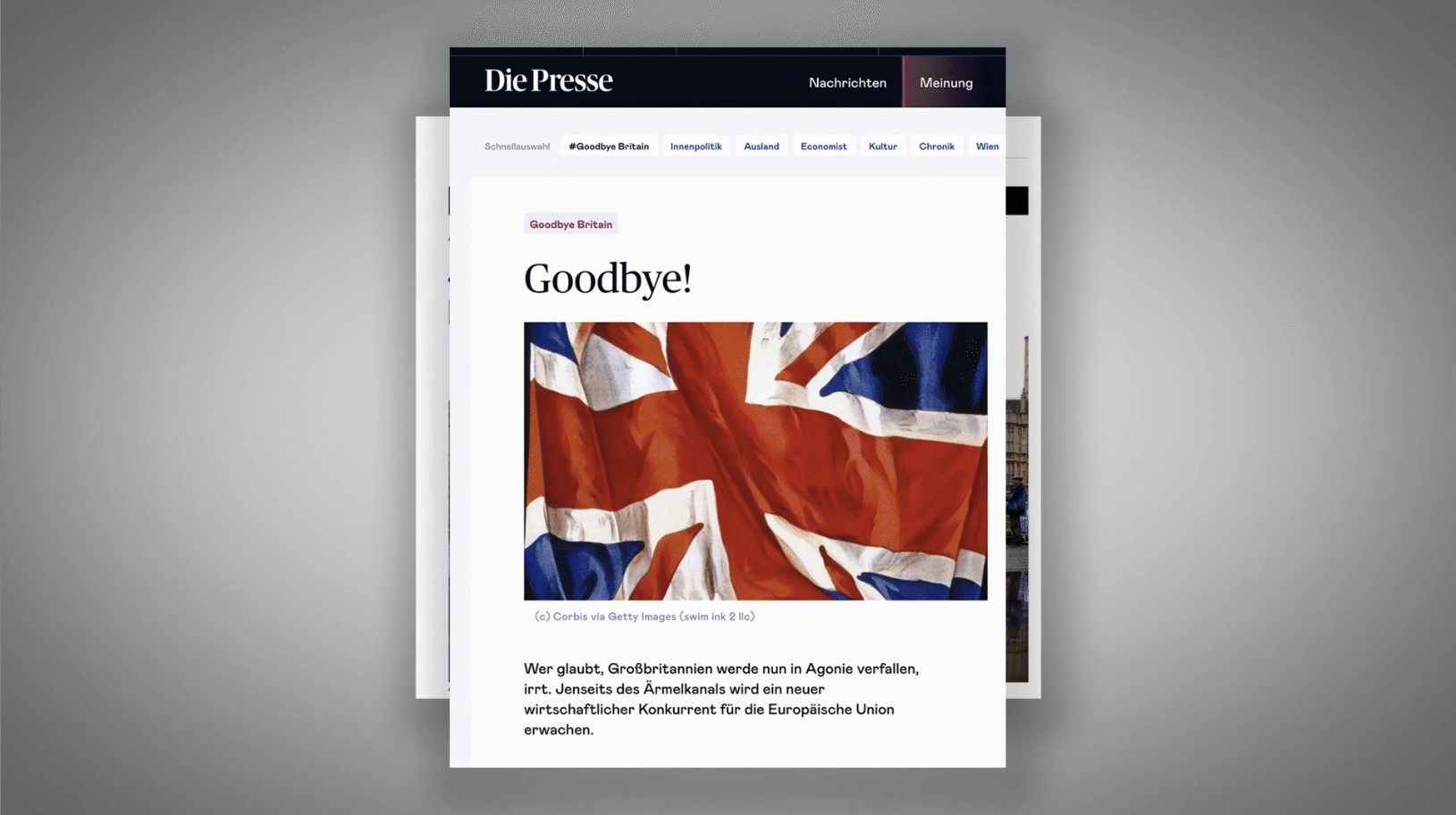 Austria: "The union loses one of its main pillars"

Up in Vienna, the low sound of mourning can be heard. German-language daily broadsheet Die Presse wheeled out the Editor-in-Chief Rainer Nowak, whose editorial put the EU into eulogy: "The European Union loses one of its most important members, one of its strongest nations, the second largest economy, around an eighth of its population... one of the model countries for the successful integration of millions of immigrants. The Union loses one of its main pillars."

Addressing those glad to see the back of the bickering Brits, Nowak insists that "Good organizations not only allow internal criticism and debates, but promote them. Leaders who fear contradiction are anxious and often overwhelmed intellectually."

Nowak fears that the 27-state EU will be weaker because "we will lack the British ideal: London has always been the western metropolis for generations," as "English culture is at the heart of European life" - and, more globally, "London was and is the bridgehead of the transatlantic friendship."

As such, "anyone who thinks that Great Britain will now fall into political agony and be economically deprived is wrong." Forecasting UK tax incentives boosting investment, Nowak warns "a new economic competitor for the union will emerge across the English Channel." 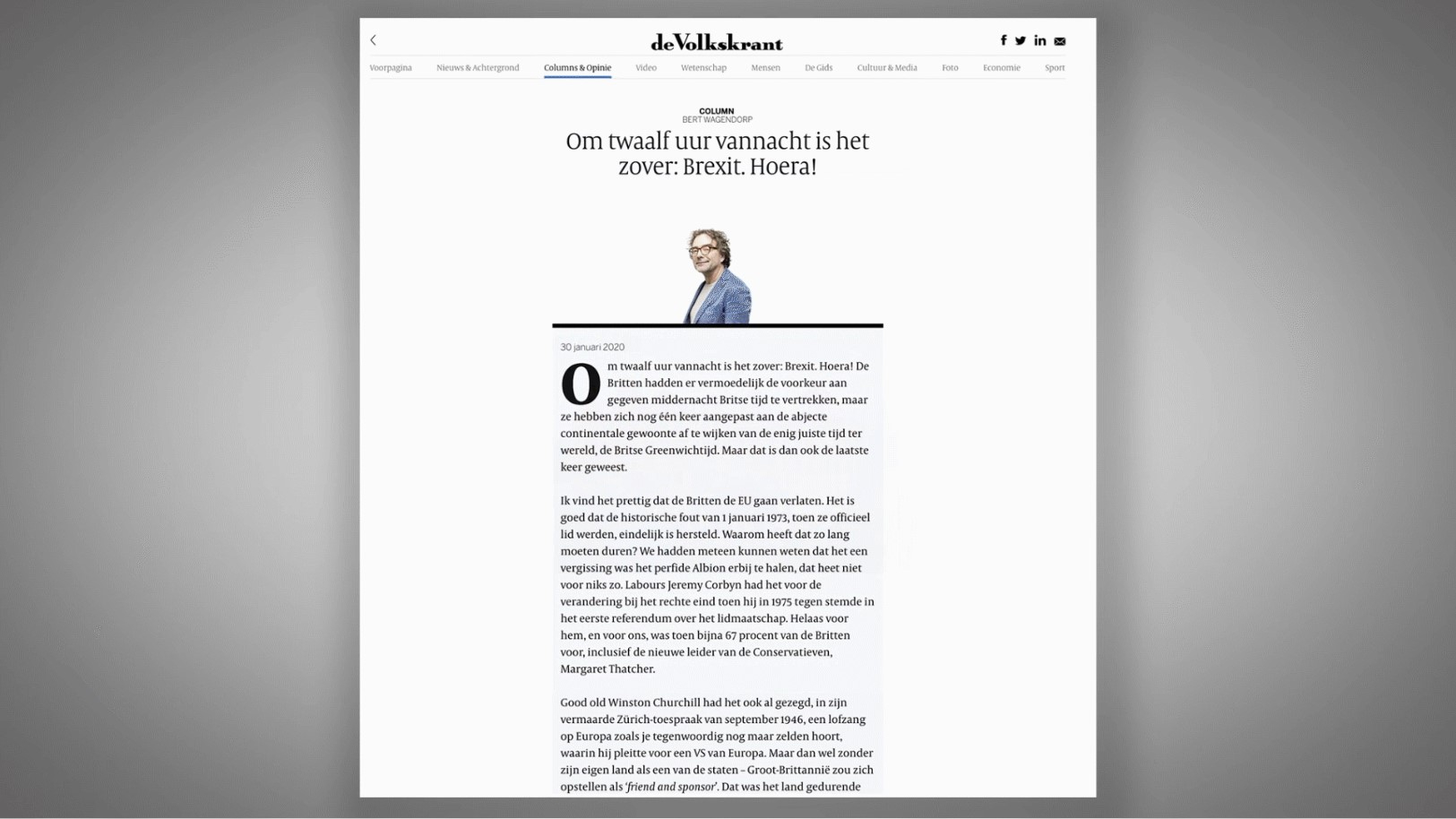 Netherlands: "They are back where they belong"

Not every European commentator is gloomy. On the contrary, Dutch newspaper De Volkskrant's columnist Bert Wagendorp is exultant: "Hooray! I like that the British are leaving the EU." The "historic error" of 1973 "has finally been corrected. Why did it take so long? We could have known right away that it was a mistake to call in the perfidious Albion."

Wagendorp notes that in 1946, Winston Churchill "argued for a United States of Europe. But without his own country as one of the states - Britain would act as a 'friend and sponsor.' That was the situation during the first decades of the European project and it should have stayed that way." Instead, "for 47 years the British have done their utmost to sabotage, slow down, dilute and transform Europe into a market for Marmite and Pringles, replacing their lost colonial empire."

Europe, says Wagendorp, "has always remained alien to the English soul. Europe, that was trenches, German car manufacturers and Louis van Gaal." Now, though, "they are back where they belong and prefer to be: outside." And that will be to the UK's detriment and the EU's benefit: "To bother the EU, the British had to be part of it, but to create a mess in Britain, you just have to let the British go their own way. No country shoots itself so skillfully in its own foot." 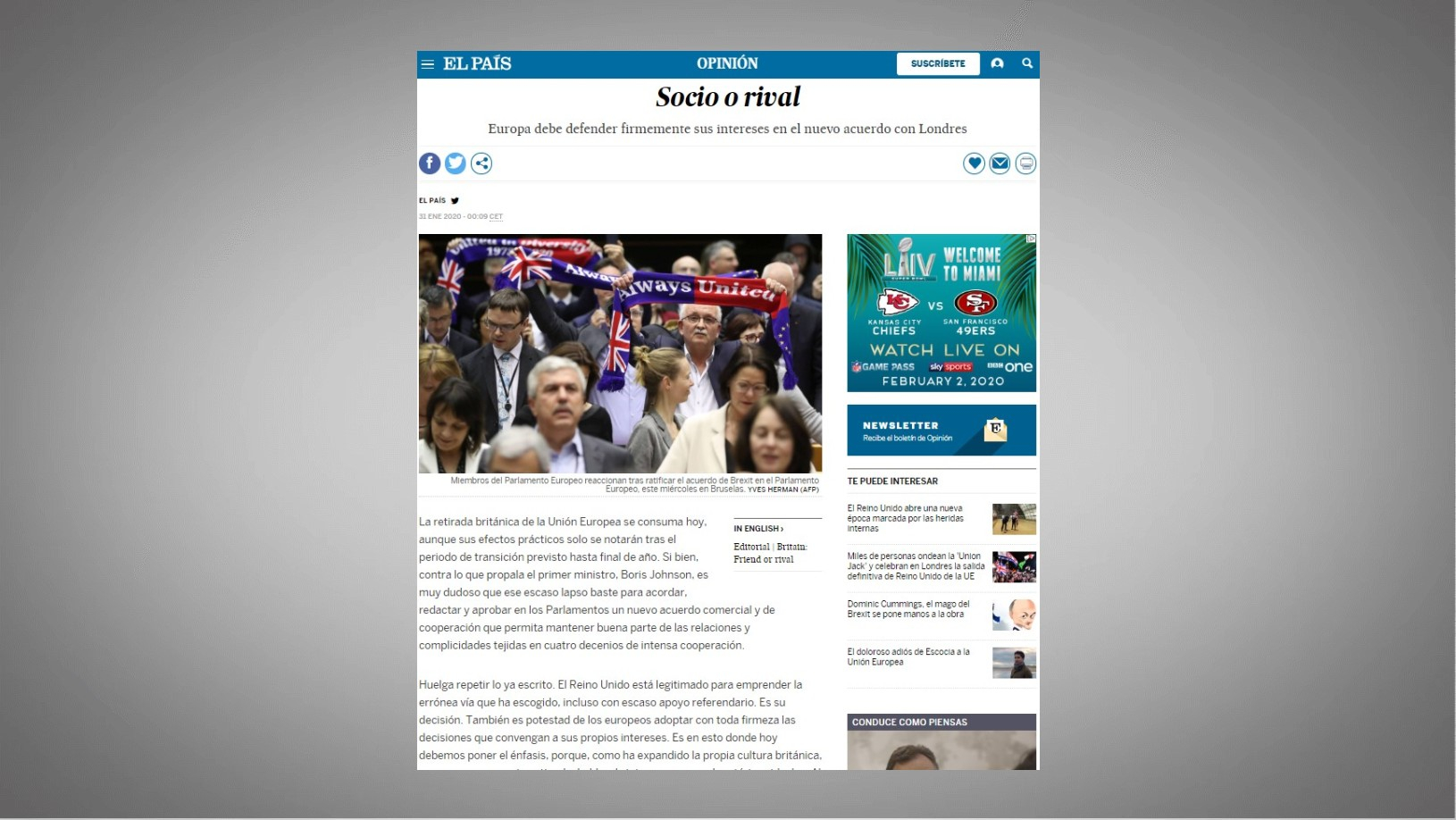 Away from the opinion pieces, major newspapers have sought to imbue their editorials with the right tone of thoughtful seriousness. Spanish daily newspaper El Pais proclaims that "It is better to have a friend than a rival (the option that London has chosen), and it is better to have a rival than an enemy, a scenario that could occur through a second wrong choice."

Just as the UK "is entitled to follow the erroneous path it has chosen," so "Europe also has the right to rigorously adopt decisions that are in its own interests. Today this is what our emphasis must be on, because, as British culture has popularized, it is not shameful but wise to speak of one's interests instead of rhetorical ideas. The interests of European citizens must be placed above all else."

The two sides need "A better and close relationship" because while "a hard exit would be worse for Britain than for Europe, given the difference in economic and demographic size," that "does not mean that a fluid economic relationship is not of interest to the European Union… the greater the distance, the greater the damage to both sides." Therefore, negotiations "must observe the principle of reciprocity" because "reaching a complete and harmonious agreement is crucial."

However, it may take time, and "if British leaders have taken four decades to reach the specious conclusion that leaving the EU will make the country stronger," then they should show patience while "dismantling the amazing achievements reached together." In the process, "a former EU member, no matter how much of an imperial past it may have, cannot hope to impose a single regulation, let alone laws, on 27 member states." 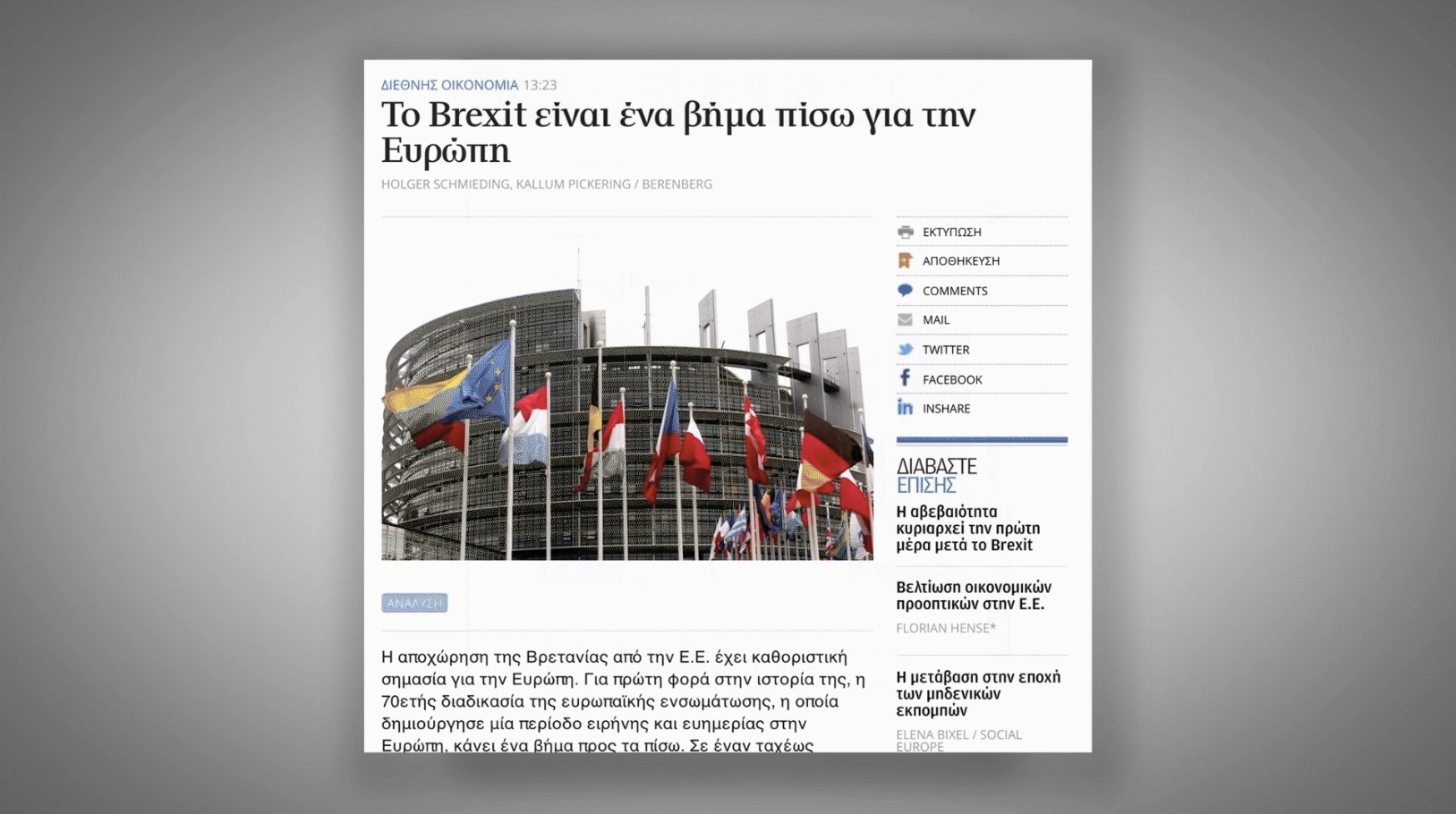 Greece: "A step back for Europe"

The El Pais editorial mentions that "dozens of studies and international economic reports" say the UK will be hit harder than the EU by Brexit. But will both sides be hurt? In Greece, where economic woes have cut deep, daily newspaper Kathimerini runs a piece by Holger Schmieding and Kallum Pickering; the leading economists at German bank Berenberg, they warn that "Brexit is a step back for Europe."

"Britain's withdrawal from the EU is crucial for Europe," say the economists. "For the first time in its history, the 70-year process of European integration, which has created a period of peace and prosperity in Europe, takes a step backwards." Indeed, while in the EU, the UK "became one of the most vibrant and well-regulated economies in the developed world."

However, post-Brexit Britain "will retain many of the elements that make it a good investment haven and a place to find work." They estimate that Britain's growth rate will drop, but not disastrously, "from 2-2.1 percent to a decent level of 1.6-1.7 percent."

Because "the extent of the damage will depend on Britain's and the EU's future cross-border relations," the economists predict the two sides "will simply come to an absolutely basic agreement on frictionless trade and close cooperation in certain areas," and that "future negotiations are likely to lead to a softer economic relationship," because "a Brexit agreement only on the key issues could create serious and damaging barriers to trade." 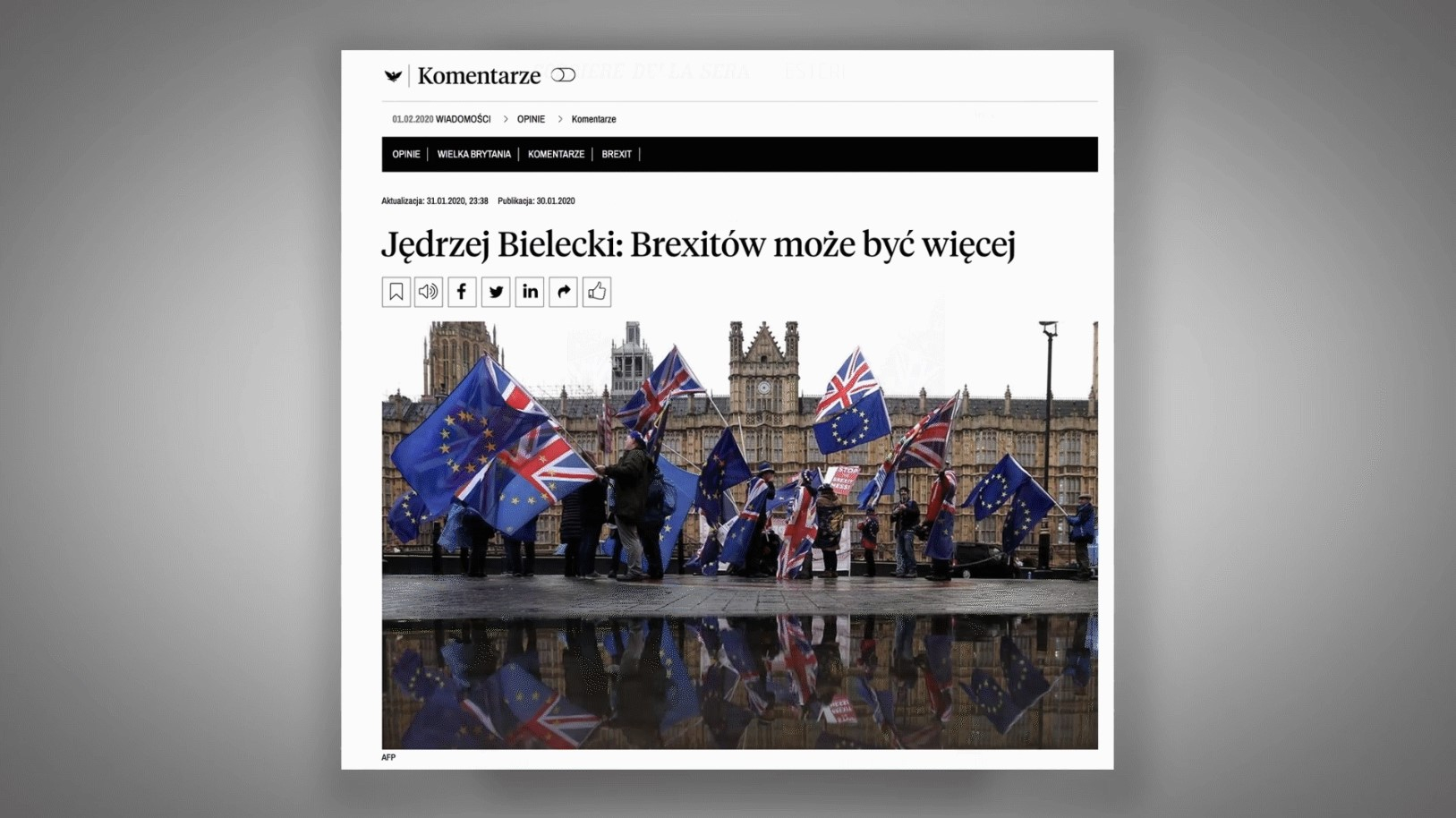 Poland: "There may be more Brexits"

Not everyone is as confident for the future. That first exit from the union could spark secessionist thoughts around the continent - or as Jędrzej Bielecki warns in Polish daily newspaper Rzeczpospolita, "There may be more Brexits."

"From now on, integration - best summarized by the 1993 declaration of European leaders of 'ever-closer union' - will cease to be the only possible direction of history, a path from which there is no turning back," writes Bielecki, who says the EU brought this upon itself through complacency.

"The British have been sending warnings to Brussels for years," he says, citing disagreements over the eurozone, Schengen, the Fundamental Rights charter and the European Court of Justice, "and yet, until the divorce referendum itself in 2016, Brexit was treated on the continent as a bogeyman, not to be taken seriously."

Bielecki acknowledges that the UK was always the most likely to leave the bloc: "None of the 27 member states that remain in the EU has the advantages of Great Britain - its global language, cultural influence, geographical location, and America's support." But "if the Brexit lesson is not thoroughly and humbly taught in Brussels, it is not difficult to imagine" another country undergoing "a similar change in public attitude towards integration."

Nor is this possibility confined to one or two members. "Poland and Hungary are usually mentioned, but this is a wider phenomenon," insists Bielecki. "The Nordic countries were the strongest opponents of the deepening of the eurozone; in Italy, the leader of the extreme right may come to power at any time and wants to leave the monetary union. Conquest of the Elysée Palace by Marine Le Pen in 2022 cannot be ruled out. This union - unlike Brexit - may no longer survive." 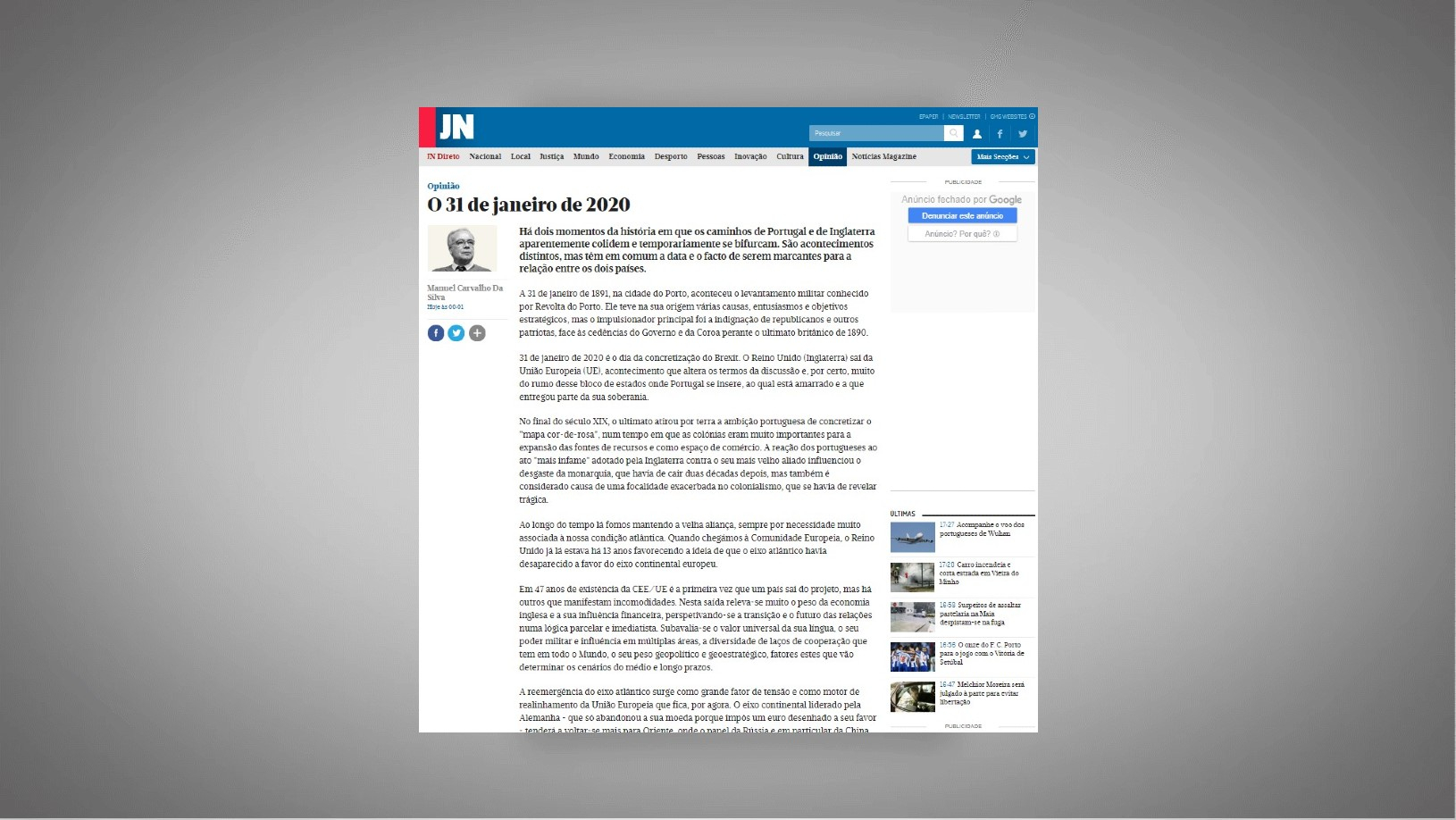 In Portuguese daily newspaper Jornal de Notícias, sociologist Manuel Carvalho Da Silva takes in a wider sweep of history by noting that 31 January is a big date in Portugal's history. On that day in 1891, Porto experienced a failed military coup against the monarchy, partly precipitated by a perceived acquiescence to British colonial interests in Africa.

Suggesting that in the last quarter of the 20th century, as both countries joined the European project, "the Atlantic axis had disappeared in favor of the European continental axis," Carvalho Da Silva reasons that Britain's return to a more US-centric outlook tip an internal European balance "as a major factor of tension and as a realignment engine for the European Union... The continental axis led by Germany will tend to turn more towards the East, where the role of Russia and in particular of China is reinforced in the global dynamics."

While Carvalho Da Silva pays tribute to the UK - "The universal value of its language was underestimated, its military power and influence in multiple areas, the diversity of cooperation ties it has throughout the world, its geopolitical and geostrategic weight" - he is understandably more concerned with Portugal's part in "the resurgent Atlantic axis." "Portugal is geographically and historically an Atlantic country. On this 31 January, the dynamics of defining our future were altered. It is necessary to discuss it openly and responsibly."