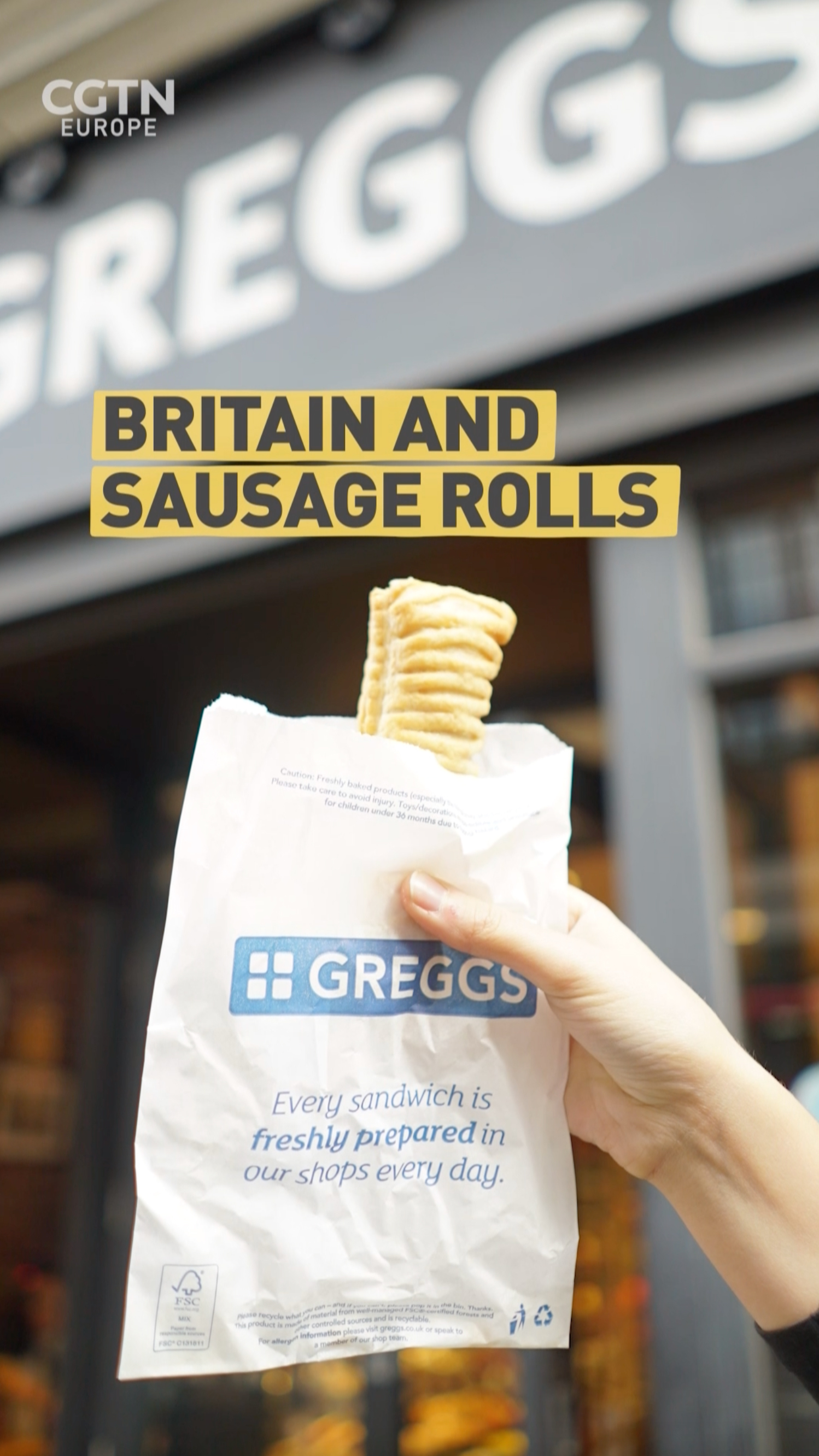 This would mean around 19,000 of its longest-serving staff would get roughly 300 pounds each, with newer staff also cashing in with a little less. 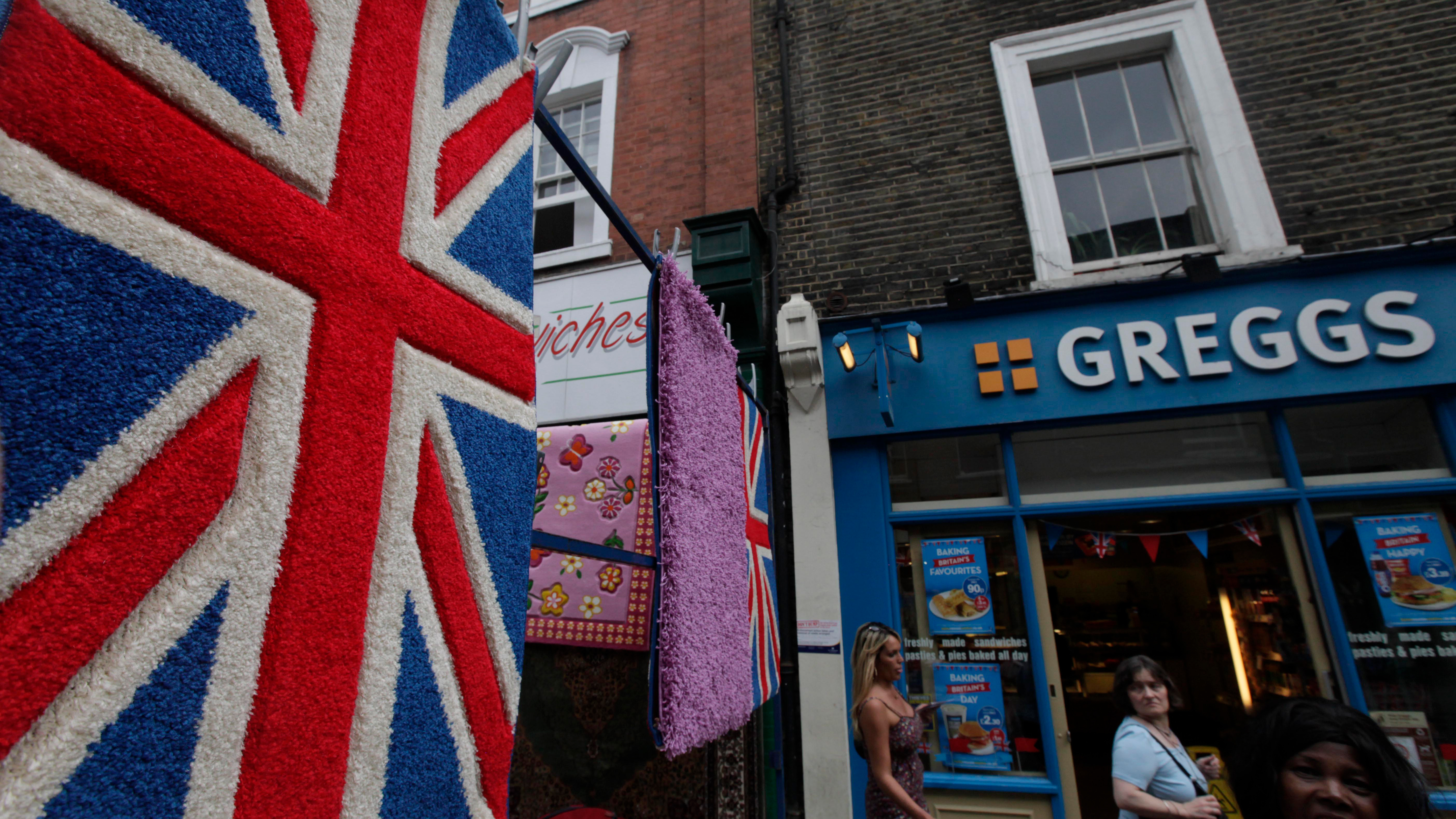 The high street bakery, ever present in UK towns and transport hubs, is considered a go-to for many Britons for a cheap breakfast or an on-the-go lunchtime snack.

Greggs said it had a "phenomenal" year in 2019, with underlying store sales up 9.2 percent over the 12 months to 28 December, compared with 2.9 percent growth in 2018. The company attributed much of this success to the vegan alternative to its bestseller, the sausage roll.

The sausage roll: A British classic

So, what exactly is a sausage roll?

Well, on its website, Greggs says the "family favorites are made from seasoned sausage meat wrapped in layers of crisp, golden puff pastry. And that's it."

The British classic is so popular that Greggs says it sells 1.5 million of them each week. 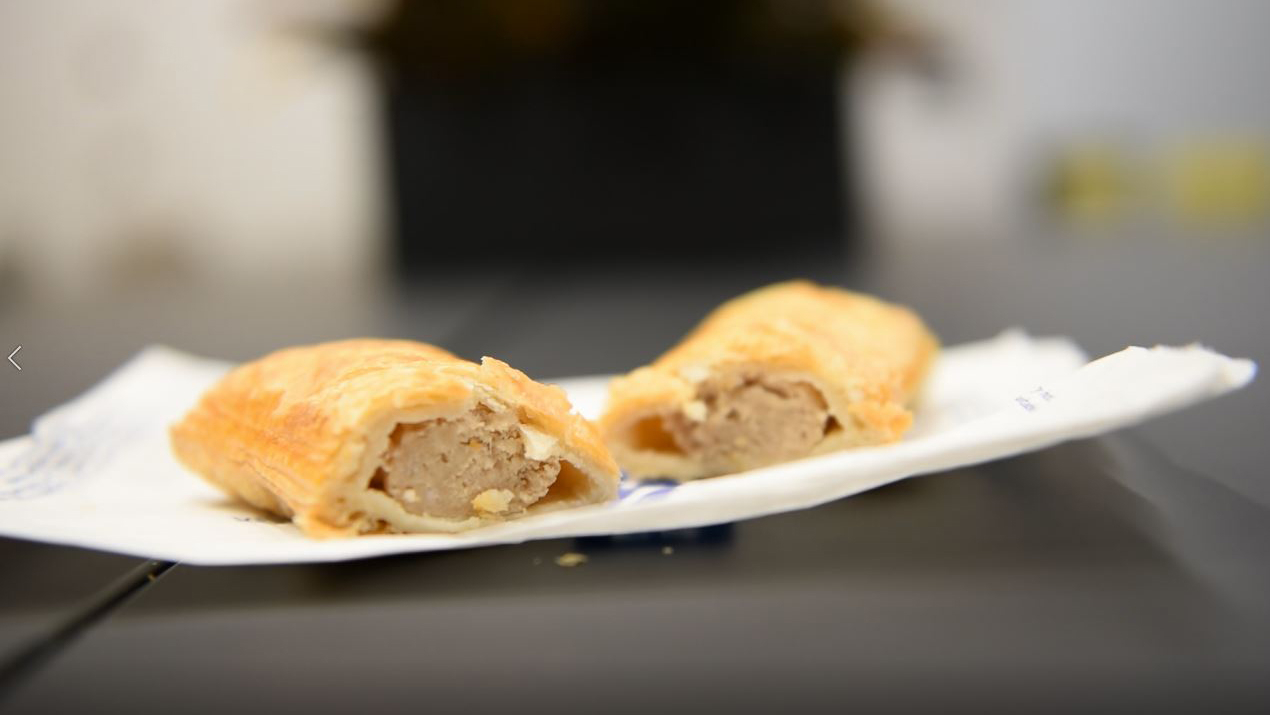 The sausage roll is a quintessentially British savory pastry snack, thought to originate in the UK, and popularized in Commonwealth nations and beyond.

It is made up of sheets of puff pastry wrapped around sausage meat and formed into tubes. It is then baked until crispy after being glazed with milk or egg whites to create the distinguished golden color. It can be served hot or cold, but many prefer the crunch of the pastry hot from the oven.

Wrapping dough around meat is thought to trace back to ancient Greek or Roman eras.

Flaky dough was first recorded in early 19th century France. Early versions of pork wrapped in flaky pastry proved popular in London during the Napoleonic Wars and became identified as an English dish. The term "sausage roll" was first mentioned in the British press in 1809.

London resident Nigel Herbert explained to CGTN the cultural significance of the snack. "Sausage rolls are a very British type of thing served at weddings and parties," said Herbert.

Londoner Sutiyah is also a fan, telling CGTN: "I actually really like sausage rolls," after buying one from a local Greggs. "But it's winter food. It's a really nice, easy, neat, not overly messy, eat-as-you-go food. Quite tasty," said Sutiyah.

In December 2018, British blogger LadBaby released a cover of the Starship song We Built This City in tribute to sausage rolls, changing the title to We Built This City on Sausage Rolls. It was released as a charity single in aid of Trussell Trust and became the 2018 UK Christmas number one. 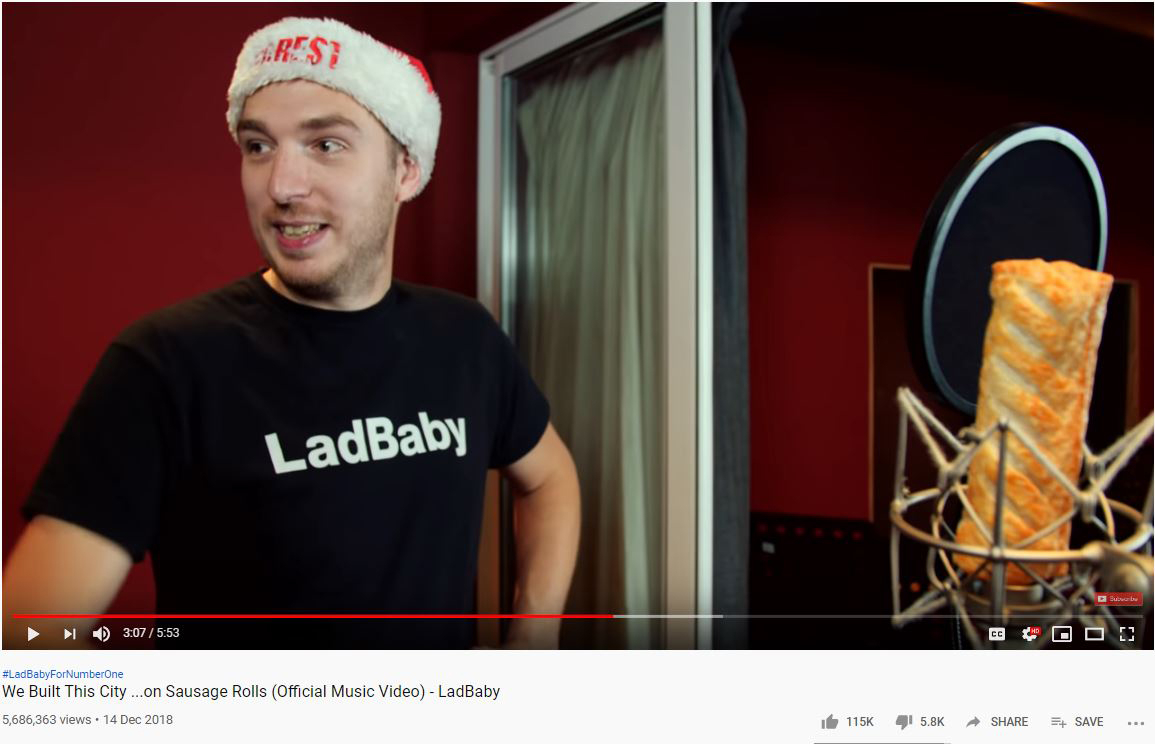 A screen grab from LadBaby's sausage roll music video, which has more than 5.5m views to date and was the 2018 UK Christmas number one.

A screen grab from LadBaby's sausage roll music video, which has more than 5.5m views to date and was the 2018 UK Christmas number one.

Greggs' vegan take on the classic sausage roll initially caused a stir when it was rolled out across UK stores in January 2019.

The launch divided opinion across the country. Herbert was one of the many Britons who disagreed with the naming of the product. "It should not be called a vegan sausage roll if it does not contain sausage," he said.

"I appreciate that sausages can be made from a number of things, but basically a sausage is comprised of meat and vegans don't eat meat."

One day after the launch, a British man from the northern city of Newcastle posted a video on social media with the caption: "How to eat a vegan sausage roll from Greggs…"

In the video, Twitter user Joe Deverdics, buys a vegan sausage roll, only to walk out of the store and throw it in the bin seconds later.

The video caused mixed reactions, with most voicing their disapproval of his wasting of food. Many were impressed with Greggs' marketing campaign, while rolling out the vegan sausage roll.

Many were impressed with Greggs' marketing campaign, while rolling out the vegan sausage roll.

However, it was British TV presenter Piers Morgan's reaction that created more of a buzz around the launch of the vegan sausage roll.

The Good Morning Britain presenter tweeted to his 7 million followers, responding to Greggs' announcement: "Nobody was waiting for a vegan bloody sausage, you PC-ravaged clowns."

Many were impressed with what they saw as a successful marketing campaign by Greggs in launching the new snack, as the debate around the product on social media helped boost sales.

The campaign by Greggs attracted attention, not least because of the company's sense of humor.

The vegan sausage roll is made in the same way as the original sausage roll, apart from, of course, the filling.

As a substitute for the meat, Greggs said it spent months working with plant-based food manufacturer Quorn to come up with a bespoke vegan-friendly filling.

The special Quorn filling is made using mycoprotein, which is essentially fermented fungus.

For many Britons, such as Sutiyah, the vegan sausage roll was a welcome alternative. "I've got really good friends who are vegans and they really struggle with finding plant-based options, so I think for any food outlet that has a range that suits people who prefer plant-based foods, that can only be a good thing," Sutiyah said. 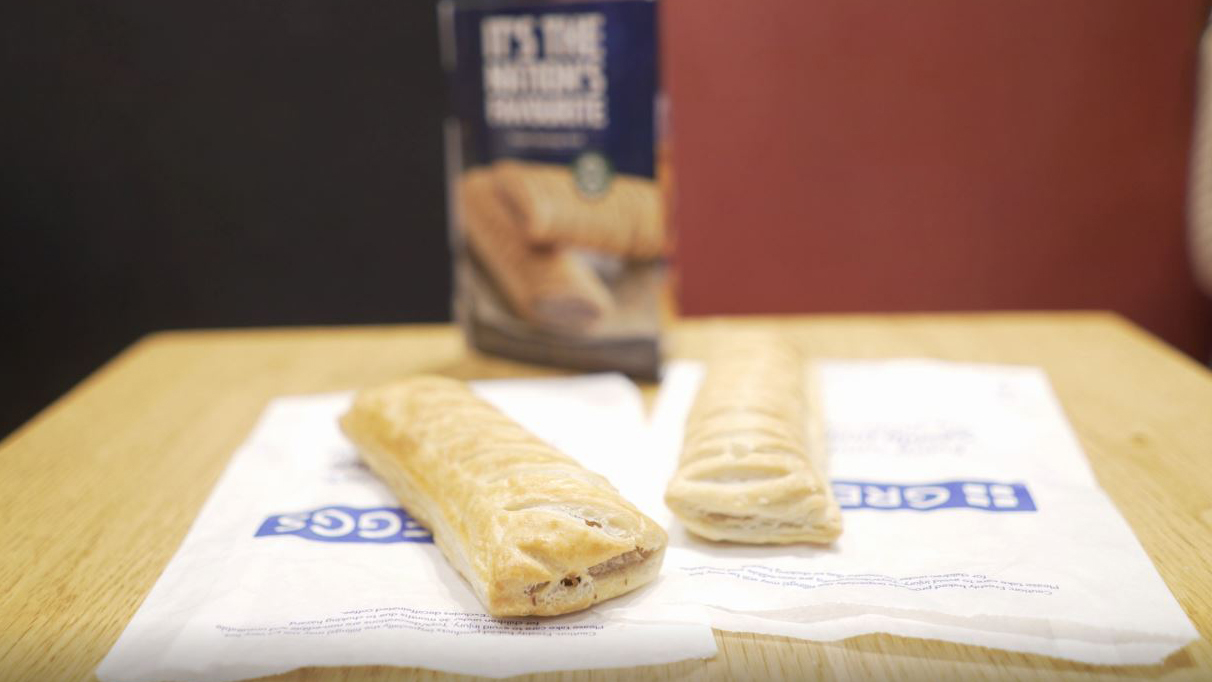 After the vegan sausage roll's huge success, Greggs' sales increased as the chain attracted new customers for products including a vegan donut and vegan soups.

Analysts expect Greggs to post a 24 percent jump in pre-tax profit to 111.6 million pounds ($145.5 million) for 2019, Refinitiv data show. The company reports its figures in March.

Greggs, which has more than 2,000 stores on British high streets, has capitalized on the growing trend for meatless diets and just days ago launched a vegan version of its steak bake. Earlier in January, dozens of people were pictured lining up at midnight at a Greggs branch in northern England to be the first to try it.

"They're flying off the shelves," CEO Roger Whiteside said of the vegan steak bake, which is made with meat substitute Quorn. 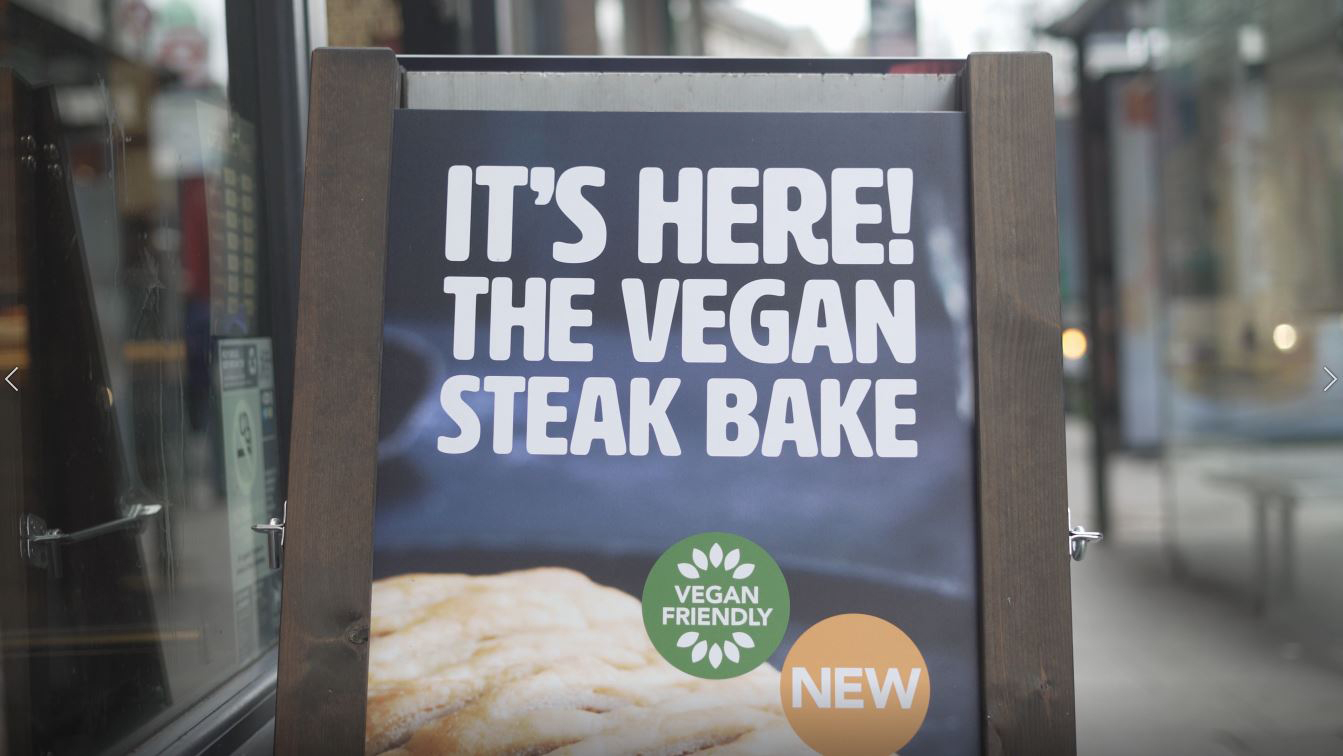 The company was founded by John Gregg in 1939, who started off delivering eggs and yeast on his bike. He then set up a bakery in Newcastle, North East England and the first branch of Greggs was opened in nearby Gosforth in 1951.

It grew over the years, taking over other bakeries and expanding from its northern heartland to the south of the country.

"Greggs is quite popular on the high street, so if I'm walking from 'a' to 'b' between meetings and I don't have time to get a proper meal, I'll pop in and get a sausage roll," said Sutiyah.