How could Iran react to the US attack?
By Liliana Ciobanu 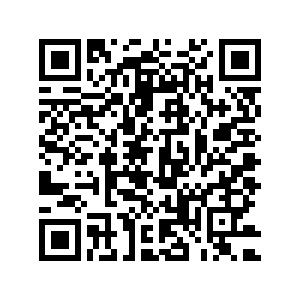 The world is now waiting to see how Iran responds to the assassination of its top military commander, Qasem Soleimani in a US drone strike.

From mobilizing its allies in the Middle East to blocking shipping in a strategic waterway or even launching a cyber attack far beyond its borders, Tehran has a range of possible options to avenge the killing. 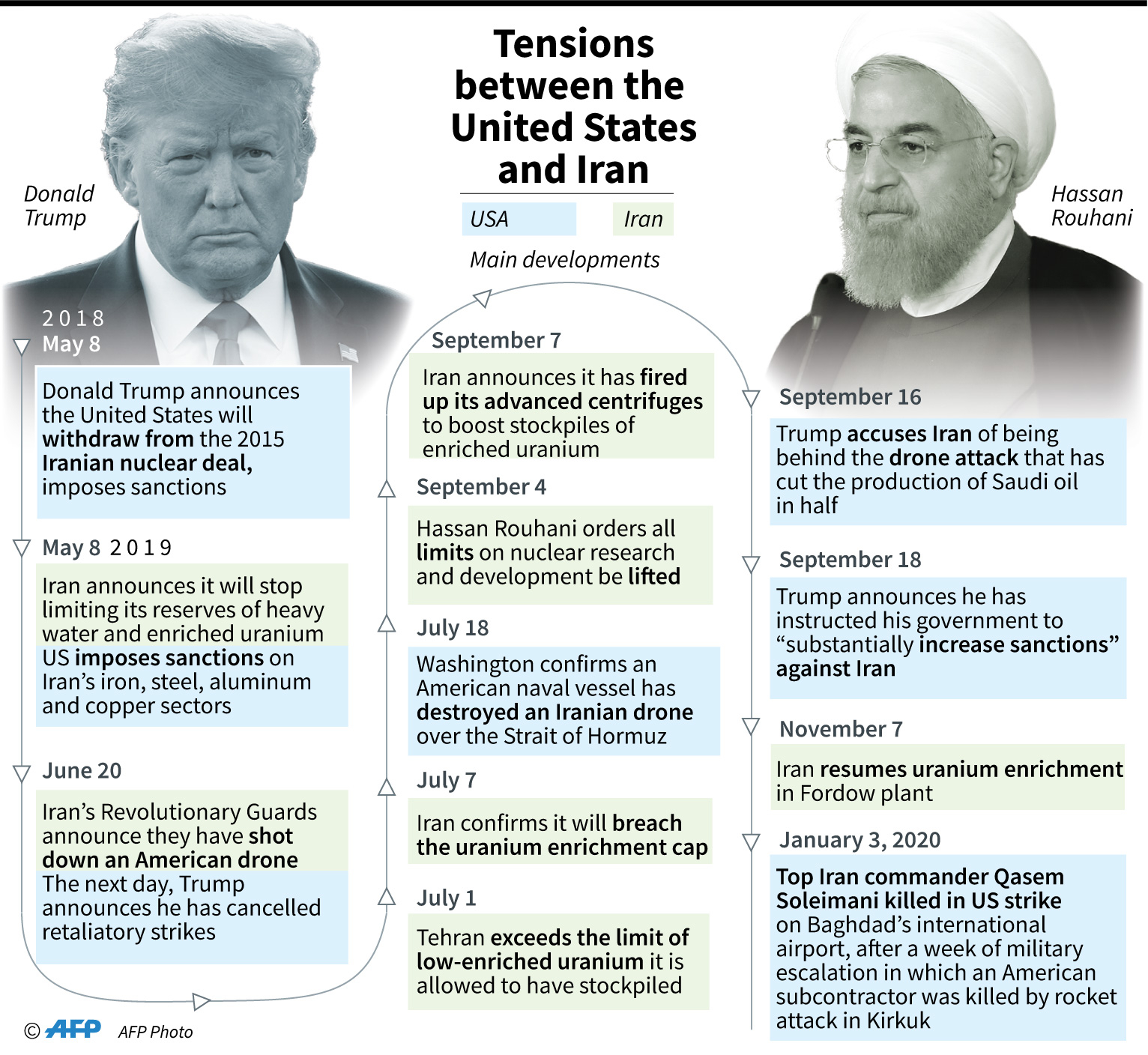 Once again, a key oil shipping route in the Middle East is back in the spotlight.

The Hormuz Strait has been at the heart of regional affairs for decades. A third of the world's sea-borne oil passes through it every day. Known as the "Maritime Oil Lifeline," the "World's Oil Valve" and the "Strait of Oil," it's also a handy bargaining chip for Iran whenever it is cornered by Western powers.

The Strait of Hormuz is a waterway separating Iran and Oman and is the only maritime connection between the Persian Gulf and the Arabian Sea. It is 21 miles wide at its narrowest point, but the shipping lane is only two miles wide in either direction.

Its adjacency to Iran gives Iranian President Hassan Rouhani control over the waters. Iran has already been accused of a series of attacks on tankers in the area and temporarily seized a British ship last year after accusing it of breaking maritime rules.

Some experts believe Iran has the capability to block the 40 kilometer-wide Strait of Hormuz. Closing it would mean major Middle East oil exporters such as Saudi Arabia, the United Arab Emirates, Kuwait and Iraq would have to pass through the congested Suez Canal of Egypt to get their barrels to Europe. 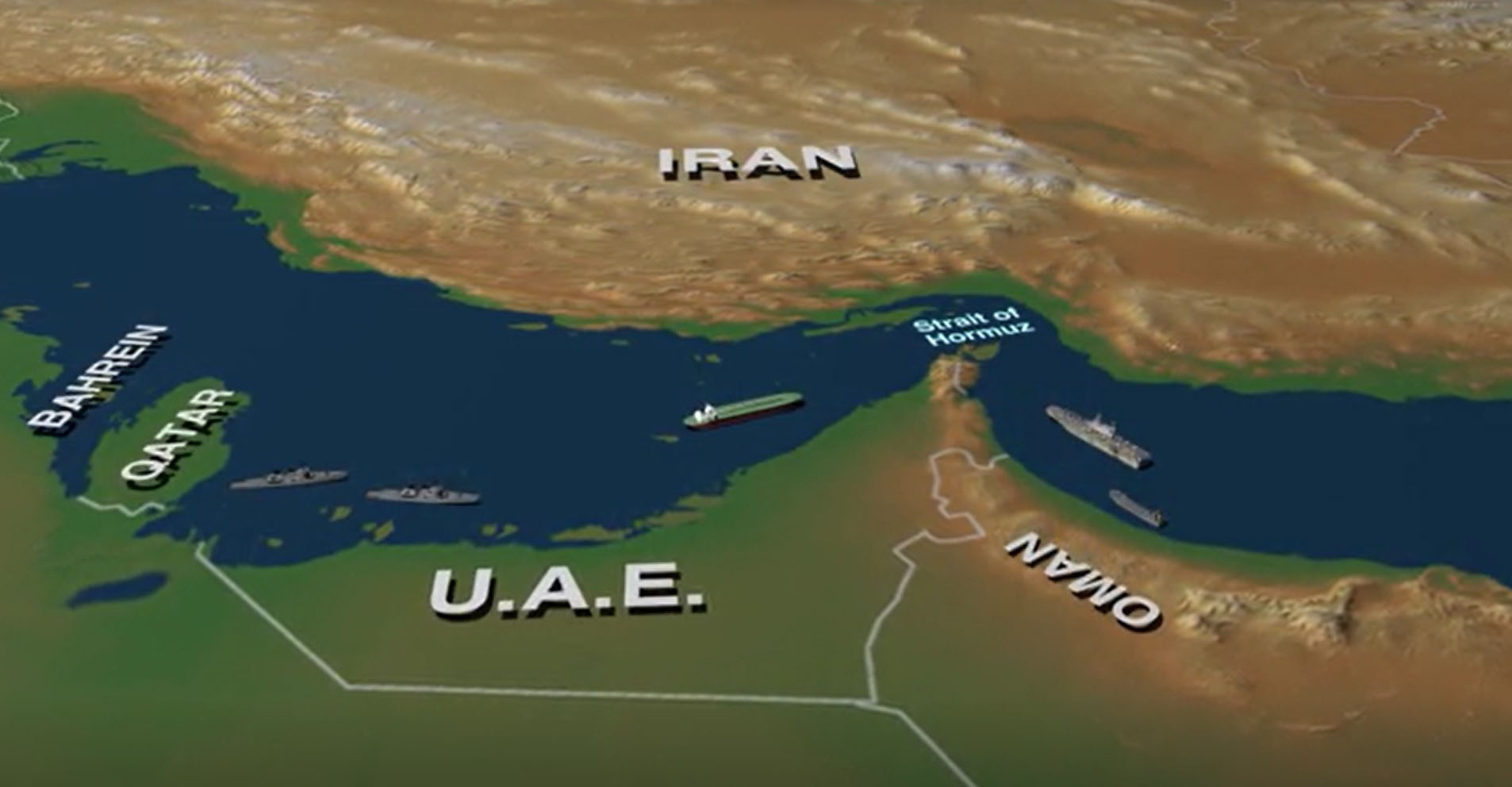 The Strait of Hormuz has been Iran's go-to choke point for decades whenever regional tensions flare up (Credit: Reuters Marketplace - StockANI)

The Strait of Hormuz has been Iran's go-to choke point for decades whenever regional tensions flare up (Credit: Reuters Marketplace - StockANI)

Oil prices immediately surged on news of the air strike that killed Soleimani, while stock markets were mixed.

However, analysts pointed out that the international capacity of oil, including that of the Organization of the Petroleum Exporting Countries (OPEC) and Russia, remains oversupplied.

Other oil supplies from producers such as the US and Norway have also been increasing - and are estimated to create around 300,000 additional barrels per day during the first half of 2020. The possible risk premium triggered by regional tensions might not last for long. 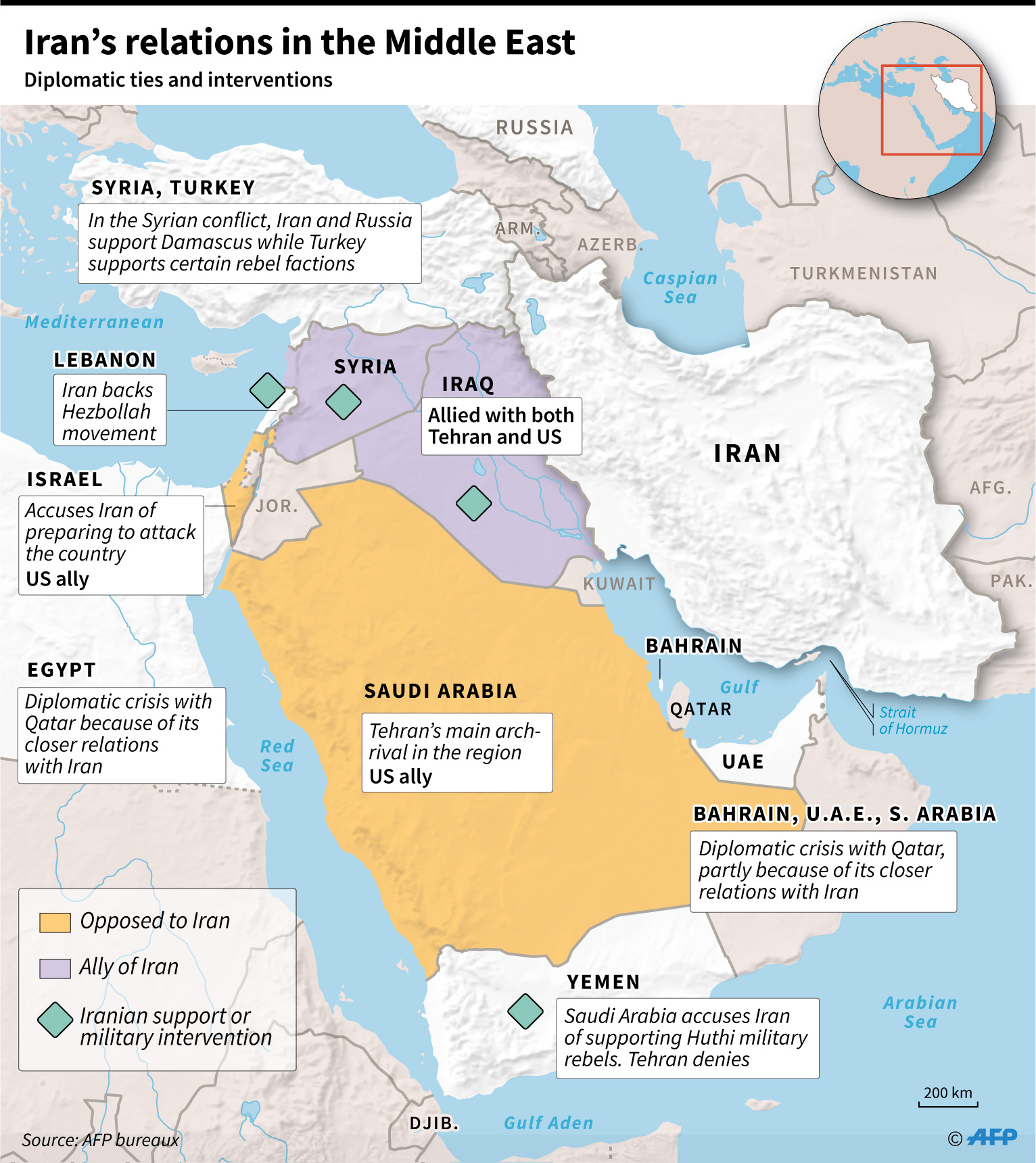 Throughout the region, Iran backs heavily armed forces, from Huthi rebels in Yemen and Shia militias in Iraq to Hezbollah in Lebanon.

Iraq is set to be the key battleground. Pro-Iranian Shia militias could work to drive US forces out of Iraq and also destabilize the Iraqi government to create a new domestic political crisis.

Elsewhere, Iranian proxies could torpedo hopes of peace in Yemen, while Hezbollah could stir up trouble in Lebanon or launch an attack on Israel to the south.

US leaders have been assassinated before, although the perpetrators were domestic - despite allegations of the Soviet Union's involvement in the 1963 assassination of John F Kennedy.

An Iranian assassination attempt on US soil on the scale of Soleimani's would be unlikely.

US nationals in the Middle East are far more at risk of assassination. In 1984, William Francis Buckley, the CIA's station chief in Beirut, was kidnapped and killed by Hezbollah, an ally of the Iranian government.

In anticipation of Iranian retaliation the US has increased its security presence in the region and issued travel warnings to its nationals.

A more subtle step would be for Iran to launch a cyber attack. Analysts believe Tehran has stepped up its capacity to attack key Western cyber infrastructure and has even built up a so-called "cyber army" that pledges allegiance to the Islamic Republic.

"What is feared here is the impact on society - electricity cuts, poisoning, gas leaks, explosions, transport chaos and hospitals," he told AFP.

The most apocalyptic scenario would be a military strike by Iran using its ballistic missile arsenal against US, Israeli or Saudi interests in the region - a move that would risk prompting an all-out regional conflict.

"The worst-case scenario is a 1914 moment," said Naysan Rafati, ICG's senior Iran analyst, envisioning clashes between the US and its allies on one side and Iran and its proxies on the other in Syria, Yemen or Iraq.

However, Rafati said Iran was unlikely to attack US soil, and analysts believe whatever action Tehran takes will not jeopardize its survival.

"The basic assumption still is that both the US and Iran want the other to back down rather than direct war," said Heiko Wimmen of the International Crisis Group, a non-governmental organization that states an objective of avoiding armed conflicts.

Alex Vatanka of the Washington-based Middle East Institute told AFP that the Iranian leadership was "opportunistic," not "suicidal", adding: "If there's an opportunity that they can take advantage of, they will." 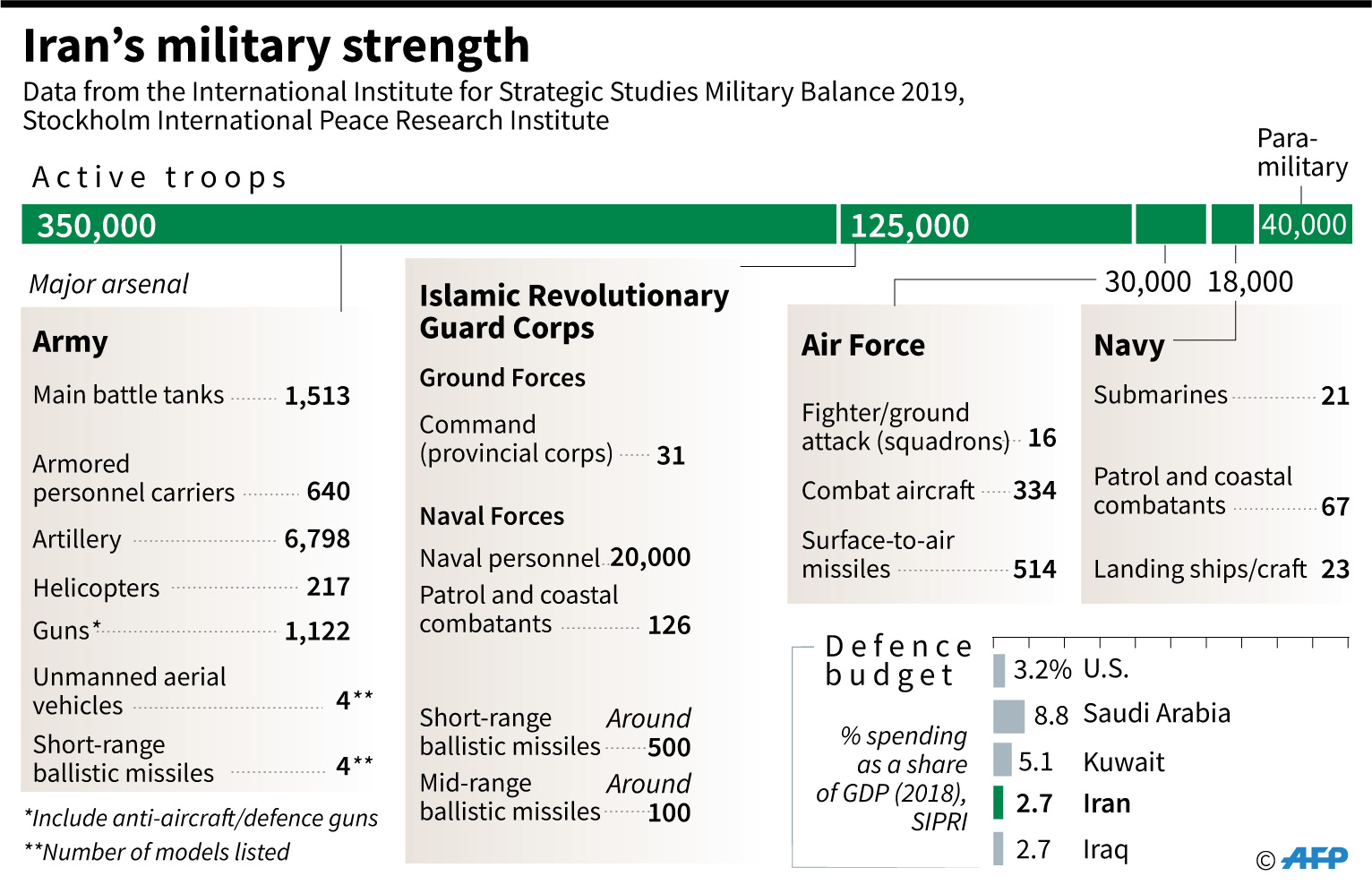 In the wake of the assassination, oil prices have jumped to four-month highs, while gold - seen as a safe haven during times of crisis - surged to a six-year high of $1,588 an ounce.

But most share indices have fallen, ending a brief positive period for investors, who had been cheered by the prospect of China and the US signing a mini trade deal next week.

On Monday, European stock markets were down, tracking losses on Wall Street, where the three main indices fell from record highs on Friday. While all seven bourses in the Gulf Cooperation Council states finished sharply down, with some fearing Iranian revenge attacks on US assets or troops.

While markets were broadly lower, energy firms rallied on the back of higher crude prices which tend to lift their profits and revenues.