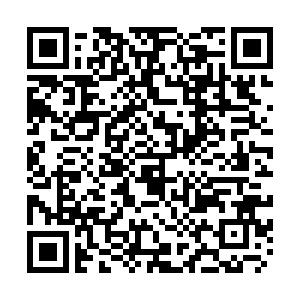 Spanish New Year's Eve, also known as "the old night", usually begins with a family dinner, which includes shrimp and prawns as well as lamb or capon. In the evening, there is a famous 10k run called San Silvestre Vallecana, for which many runners travel to Madrid.

The central countdown is normally followed from the clock on top of the Royal House of the Post Office in Puerta del Sol Square, in Madrid.

It is tradition to eat twelve grapes, one each time the clock chimes.

The tradition dates from 1909 when grape growers in Alicante considered it a way to cut down their large production surplus. This is a common tradition followed by most Spaniards, and the twelve grapes have become synonymous with the annual celebration.

A lot of people finish off the celebrations by greeting each other and toasting with sparkling wine such as cava, champagne or cider. The song "Un año más" by Mecano is also frequently played. 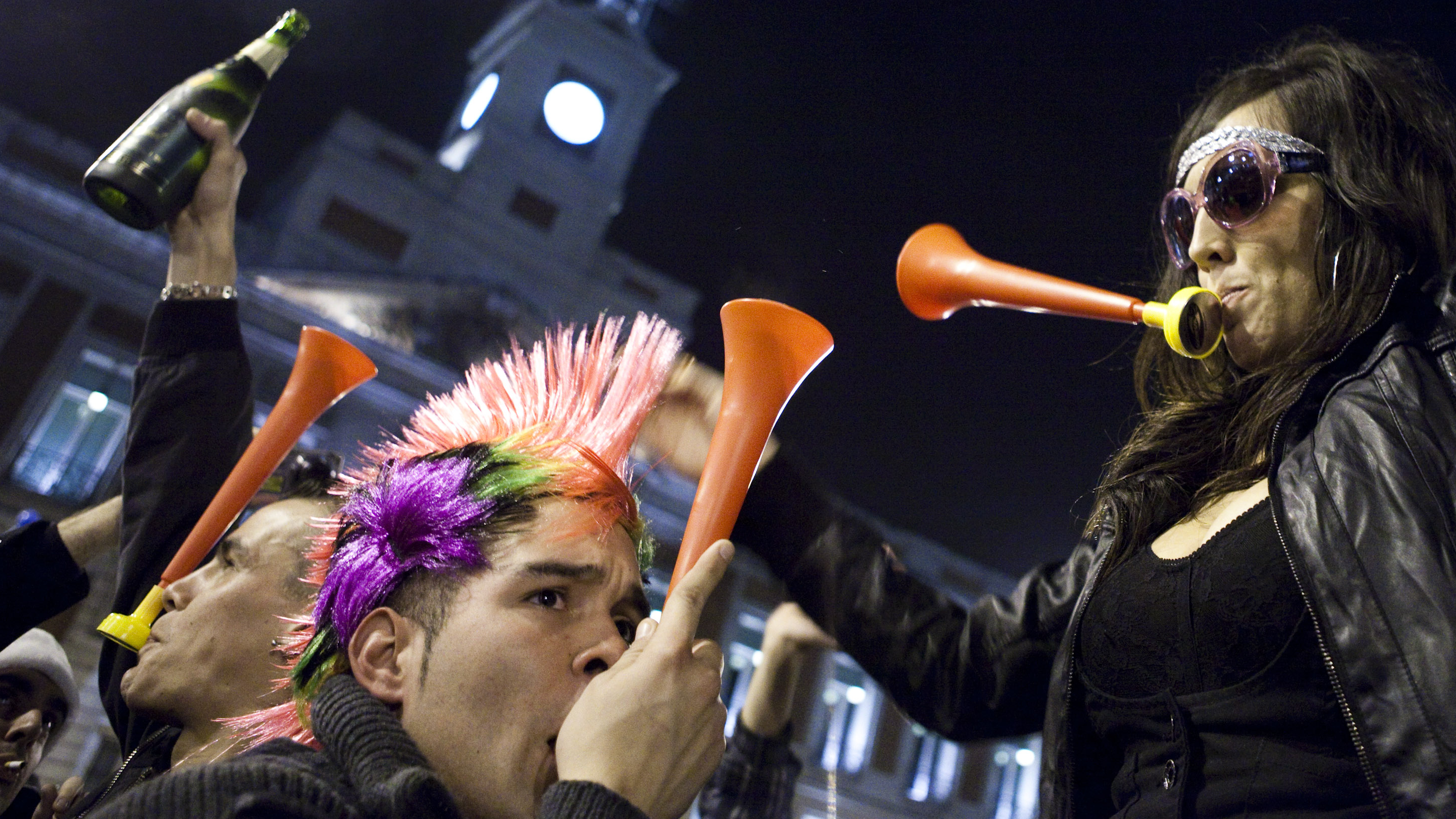 These celebrations can be just a small gathering with friends or in the style of a fancier ball, know as une soirée dansante.

In certain regions such as Savoie, on New Year's Day and throughout January, it is customary to give money to children. Giving a New Year's Tip (les étrennes), is a traditional aspect of visiting family members as well as being a token to say thank you to house staff, guards and concierges for the quality of their service.

Many celebrations are also held across Paris and other major cities. 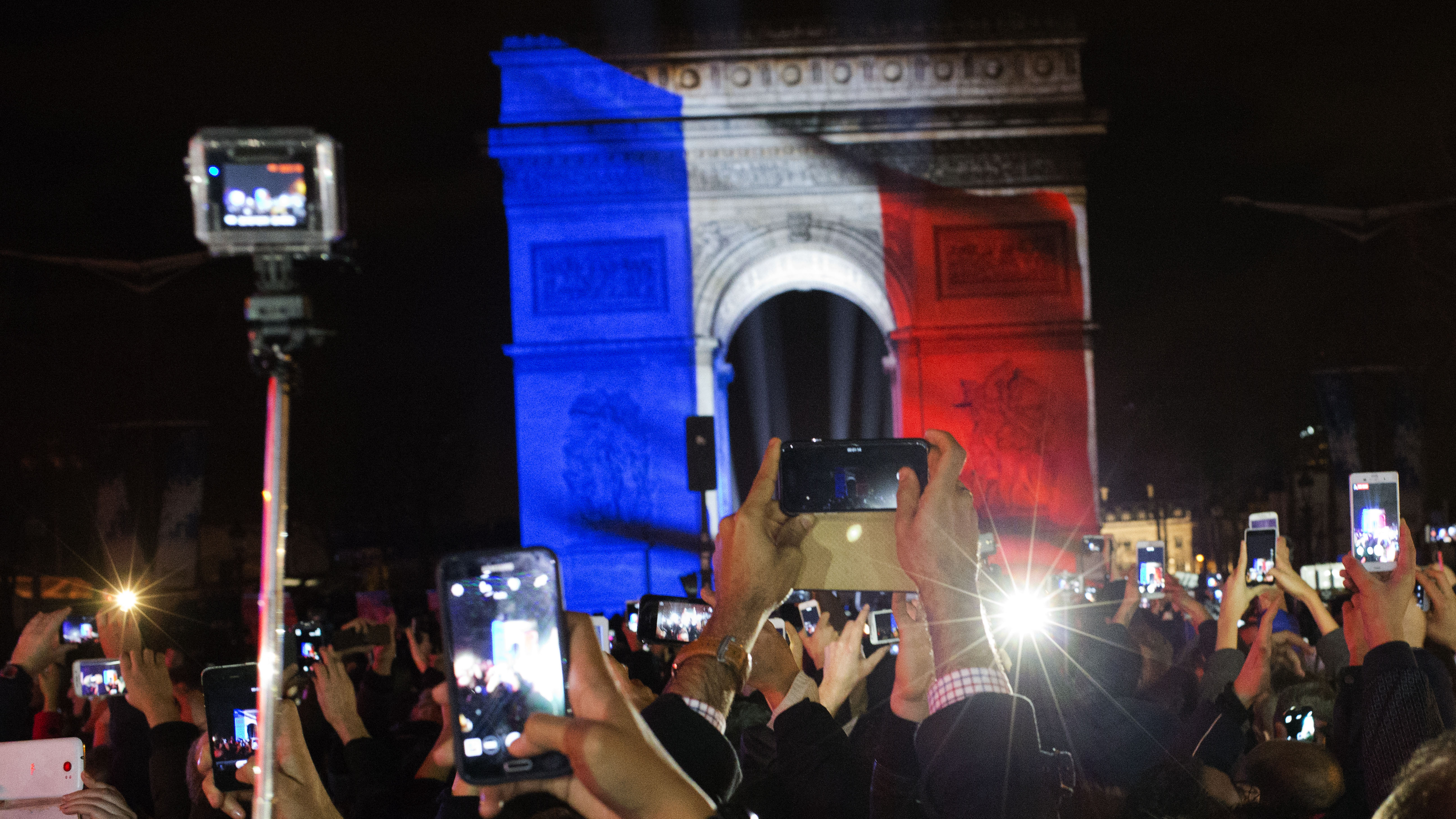 New Year's Celebrations vary greatly across Ireland, and just like in other countries, some people opt for small parties and stay in the home with families and friends whilst others decided to party at the pub or at clubs.

But Ireland has many traditions that, even if they are no longer followed, have contributed significantly to the culture. Over the centuries, similar to other Celtic countries, New Year's Eve traditions have developed which have been designed to bring good luck and banish any changes of misfortune over the years ahead.

In many parts of Ireland, it was considered important to clean the house for the new year. Another tradition included remembering family members who had passed away by setting  an empty place for them at the dinner table and leaving it empty.

Another unusual tradition included banging the walls of the house with bread, which was believed to chase away bad luck and evil spirits. It was also believed that it would encourage good luck whilst ensuring that there would be plenty of bread available in the year ahead. 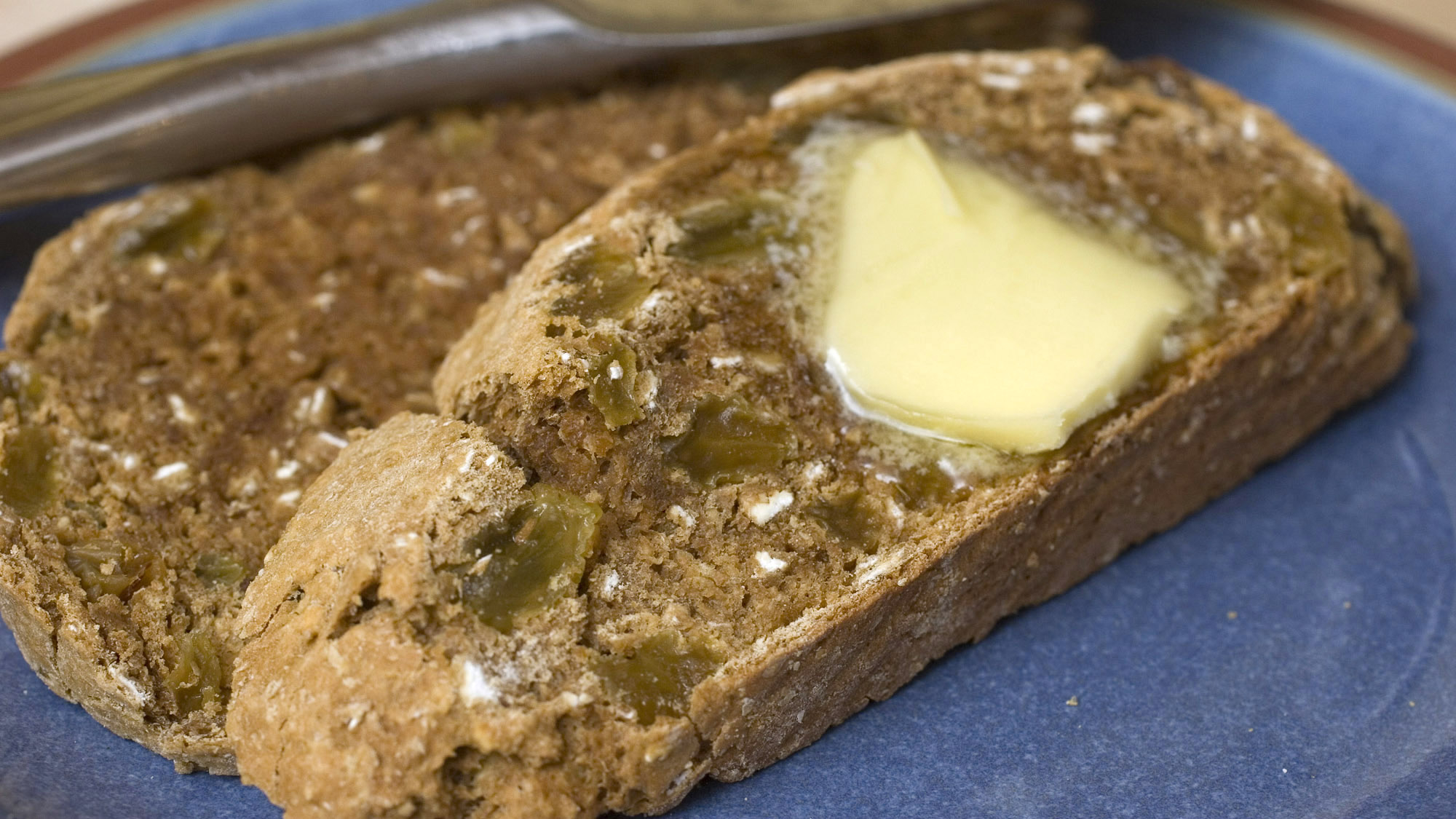 It was believed that if the walls of a house were banged with bread, plenty of bread, such as this Irish soda bread, will be available in the year ahead. (Credit: Associated Press)

It was believed that if the walls of a house were banged with bread, plenty of bread, such as this Irish soda bread, will be available in the year ahead. (Credit: Associated Press)

New Year's Eve in Denmark might be the only time that you can smash your old dishes and leave them on the doorsteps of your neighbours. This is a way of showing how much you value them as a friend. That is to say, the bigger the heap of china found on your doorstep, the more popular you are among your friends.

Another way that Danes like to ring in the new year is to stand on chairs and jump off  them at midnight. It is believed that leaping into January is a way of banishing bad spirits and bringing good luck.

Dishes that people eat in Denmark on New Year's Even includes a special dessert called Kransekage and champagne. Other dishes include boiled cod, stewed kale and cured saddle of pork. In more recent times, expensive cuts of beef and sushi are also popular choices.

Thousands of people gather together in Rådhuspladsen (the Town Hall Square) and cheer. Many people watch the monarch's New Year message from Amalienborg Palace and the Town Hall clock in Copenhagen striking midnight. 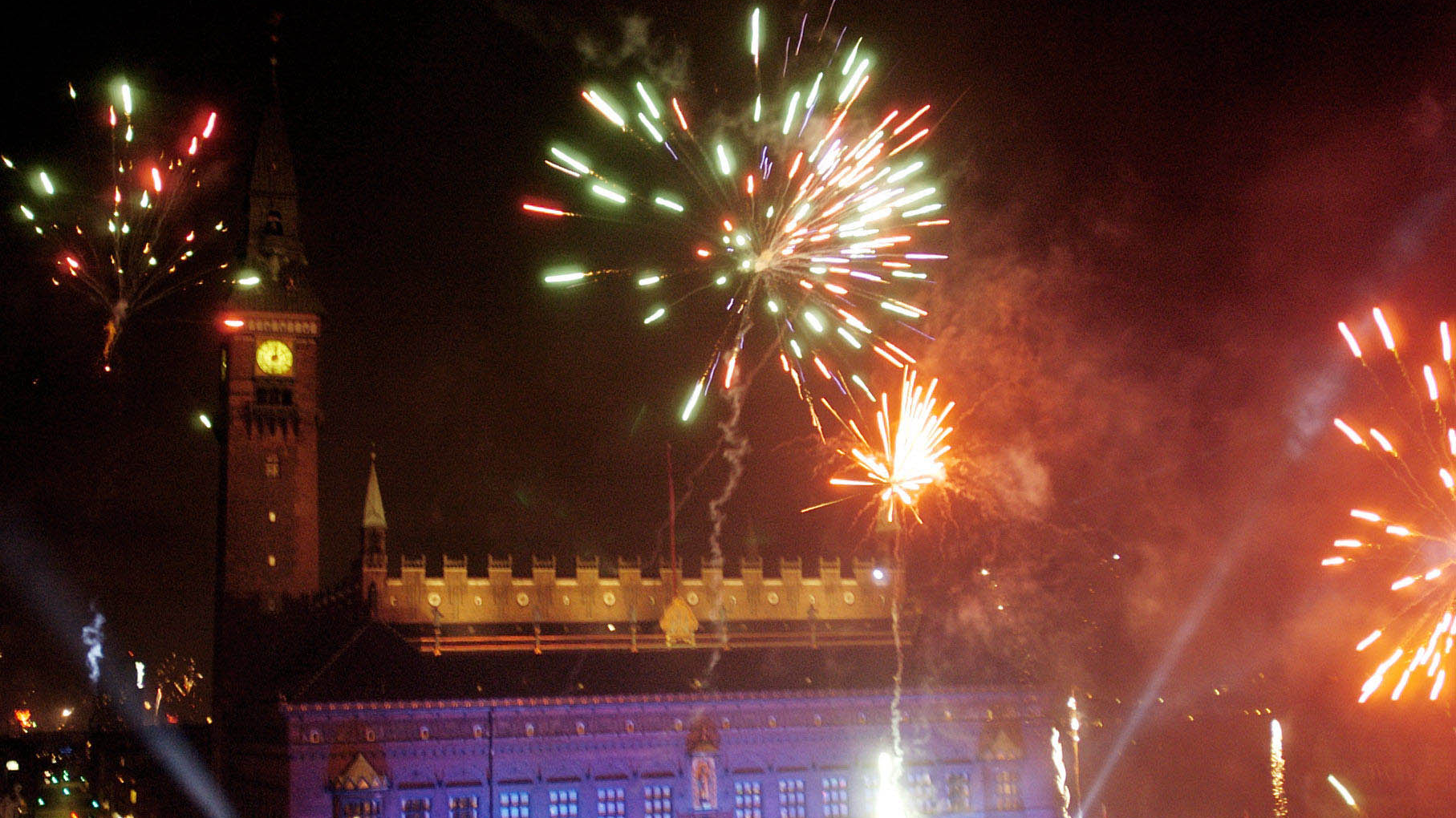 Like most countries, fireworks are popular. But a more common Finnish tradition is molybdomancy, a technique of being able to tell the fortune in which tin (lead) is melted in a tiny pan on the stove and is thrown into a bucket of cold water. The resulting shape is analyzed and the shadow it casts by candlelight are interpreted to predict a person's future health, wealth or happiness. The predictions are more customary rather than taken seriously in today's times.

New Year's celebrations at Helsinki Senate Square are shown on television and the New Year is welcomed in according to the Helsinki Cathedral clock.

New Year's Eve is known as Hogmanay in Scotland. One of the main customs to celebrate in the country is First-Footing, which involves friends and family members going to each other's house with gifts, including whisky and lumps of coal.

Good luck for the following year is also determined by who walks through the door first. It is often said that the best person to walk through the door is a tall dark-haired man and the unluckiest is a red-headed woman. Stage-play was often involved in this custom.

To celebrate, many Scottish people sing Auld Lang Syne, which is a Scottish poem turned folksong and singing it after the clock has struck twelve is a tradition that has seeped into the rest of the UK.

Across Scottish cities and towns, firework displays are often hosted, alongside torchlight processions and bonfires. This is believed to scare away evil spirits. 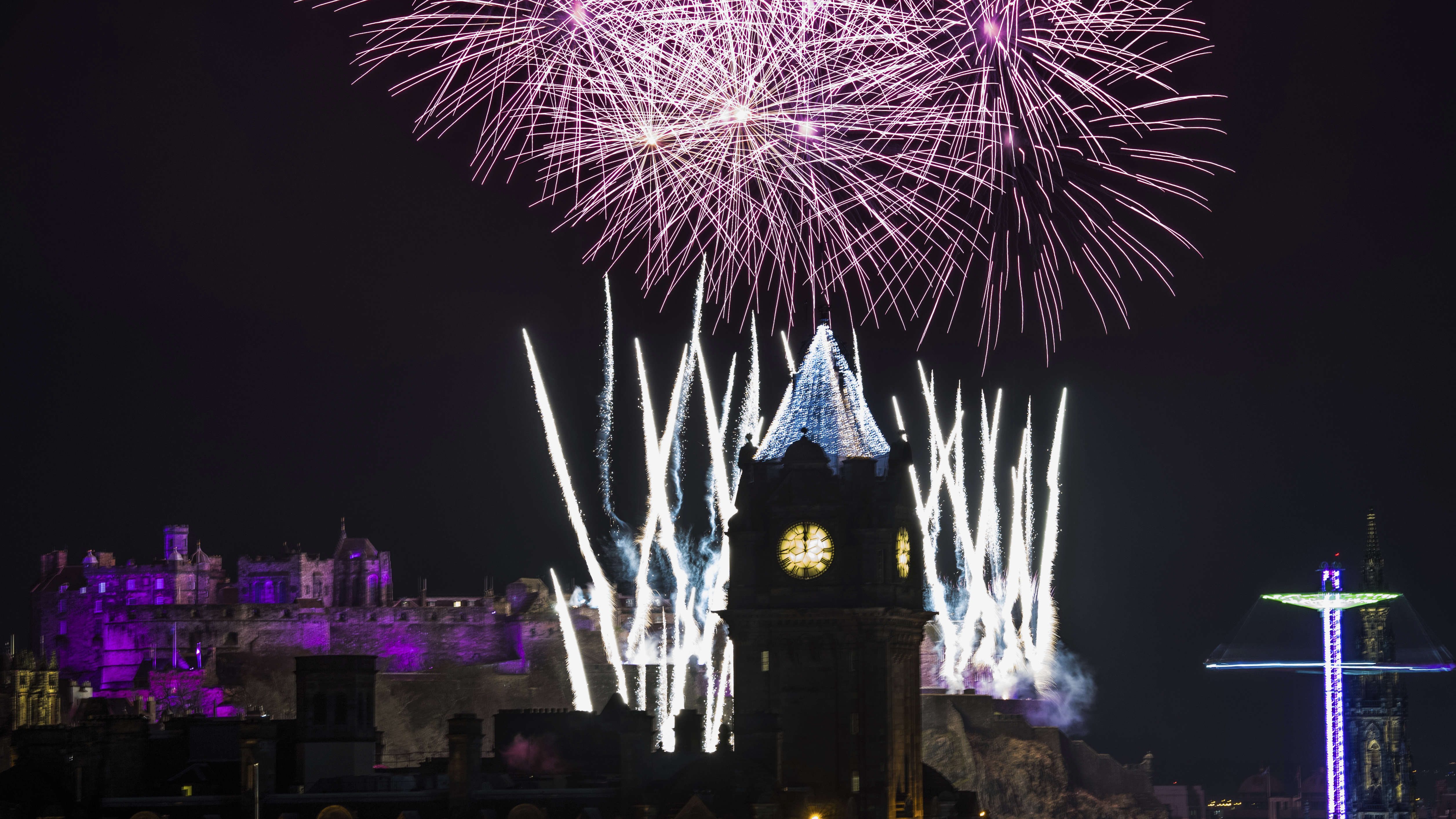 Fireworks being set off over Edinburgh Castle next to the world's largest street party. (Credit: Alex Hewitt/ AP)

Fireworks being set off over Edinburgh Castle next to the world's largest street party. (Credit: Alex Hewitt/ AP)

In Slovenia, there is a popular belief that prevails that if you get up early on New year's Day, you will rise early throughout the whole year. On the other hand, whoever lies in bed on New Year's Day will get out of bed late for the next 365 days.

The New Year's Eve menu in Croatia is an important one, and it is believed that what you eat can determine your luck for the following year.

It is tradition in Croatia for New Year's Eve to involve a large feast. In some parts of the country, it is advised to avoid eating chicken because the bird is plucked backwards, alongside lobster and crab which move backwards, because it is believed this could lead to setbacks. Eating winged fowl in general is avoided by many because tradition says that one's luck could fly away.

Rabbits and fish are also avoided in order to ensure that luck does not run away like a frightened rabbit or swim away like a fish. Pickled foods are also a big 'no' to prevent the new year from turning sour. 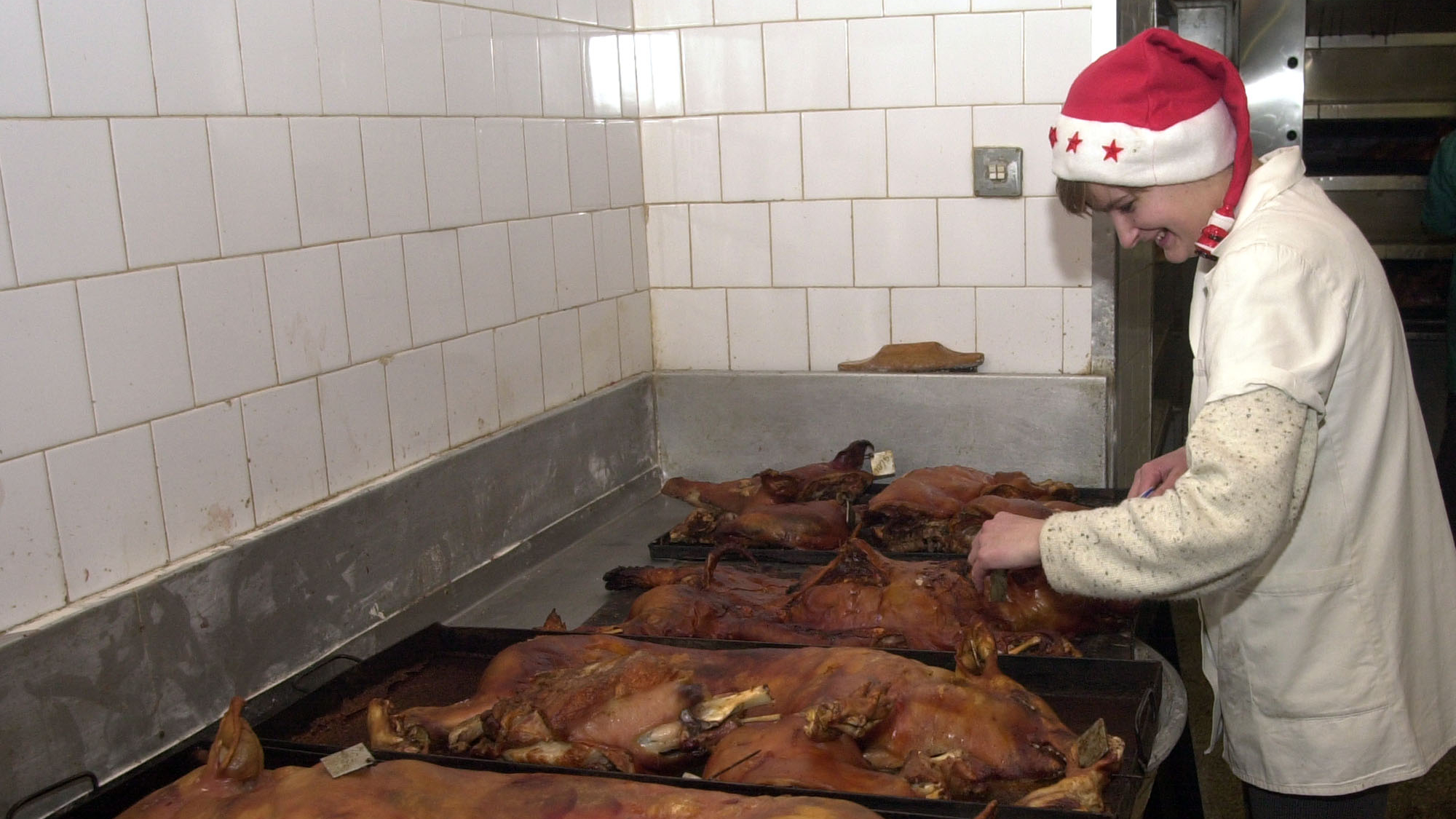 Serbian New Year's Eve traditions are based on ancient Slav traditions, which held that the new Year is a result of the birth of the sun.

It was believed that all of the traditions associated with New Year's Eve were to help the sun to defeat the darkness and the cold, in order to help nature once again wake up.

Serbs decorate trees at New Year's Eve rather than at Christmas time, like most countries.

Serbian New Year is also celebrated on January 13, in accordance with the Julian calendar. It is typical for a concert to be held in front of City Hall or the National Parliament in Belgrade. 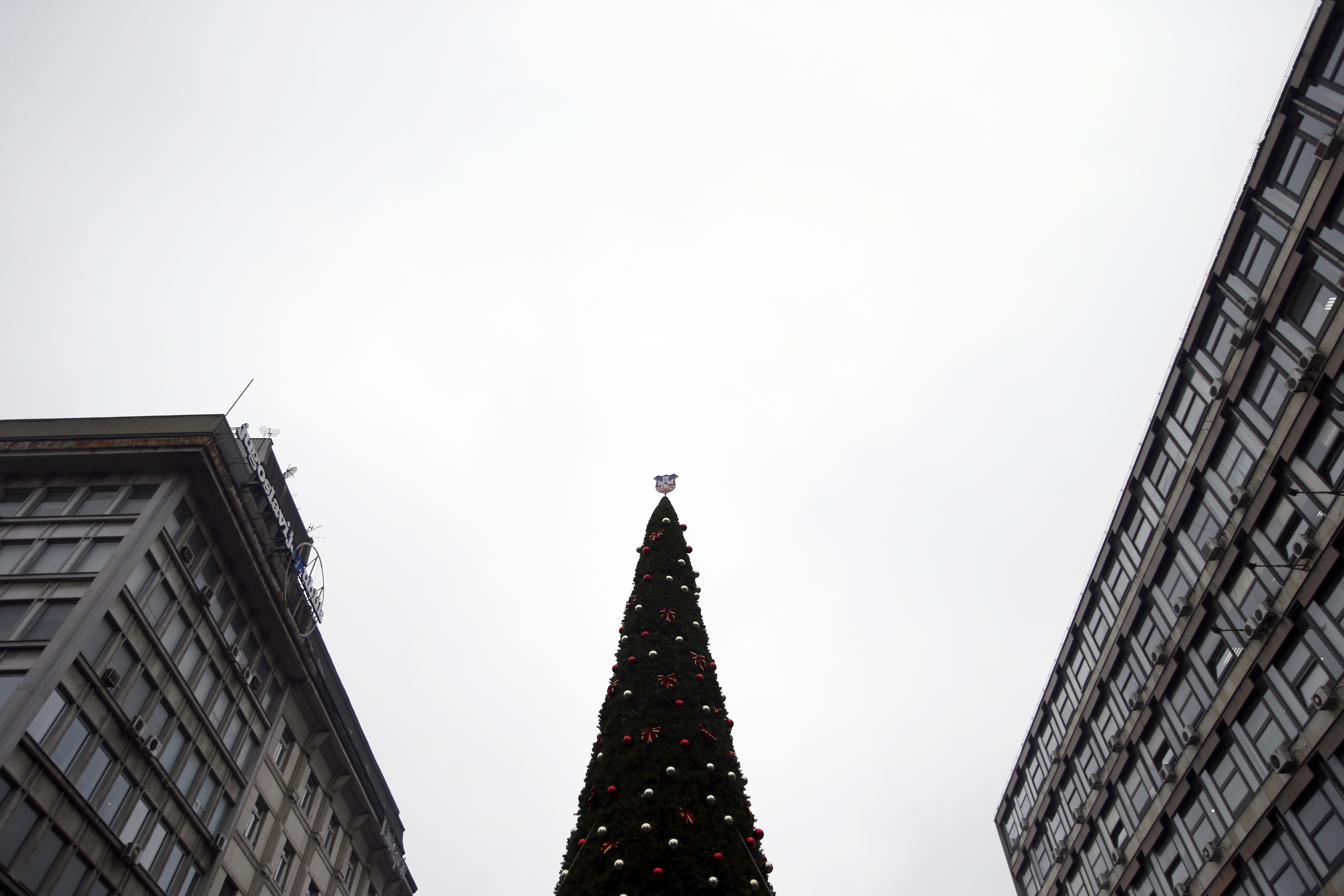 A christmas tree is decorated with the city coat of arms in downtown Belgrade, Serbia. (Credit: Associated Press)

A christmas tree is decorated with the city coat of arms in downtown Belgrade, Serbia. (Credit: Associated Press)