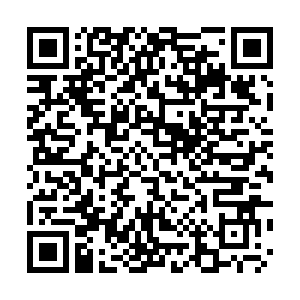 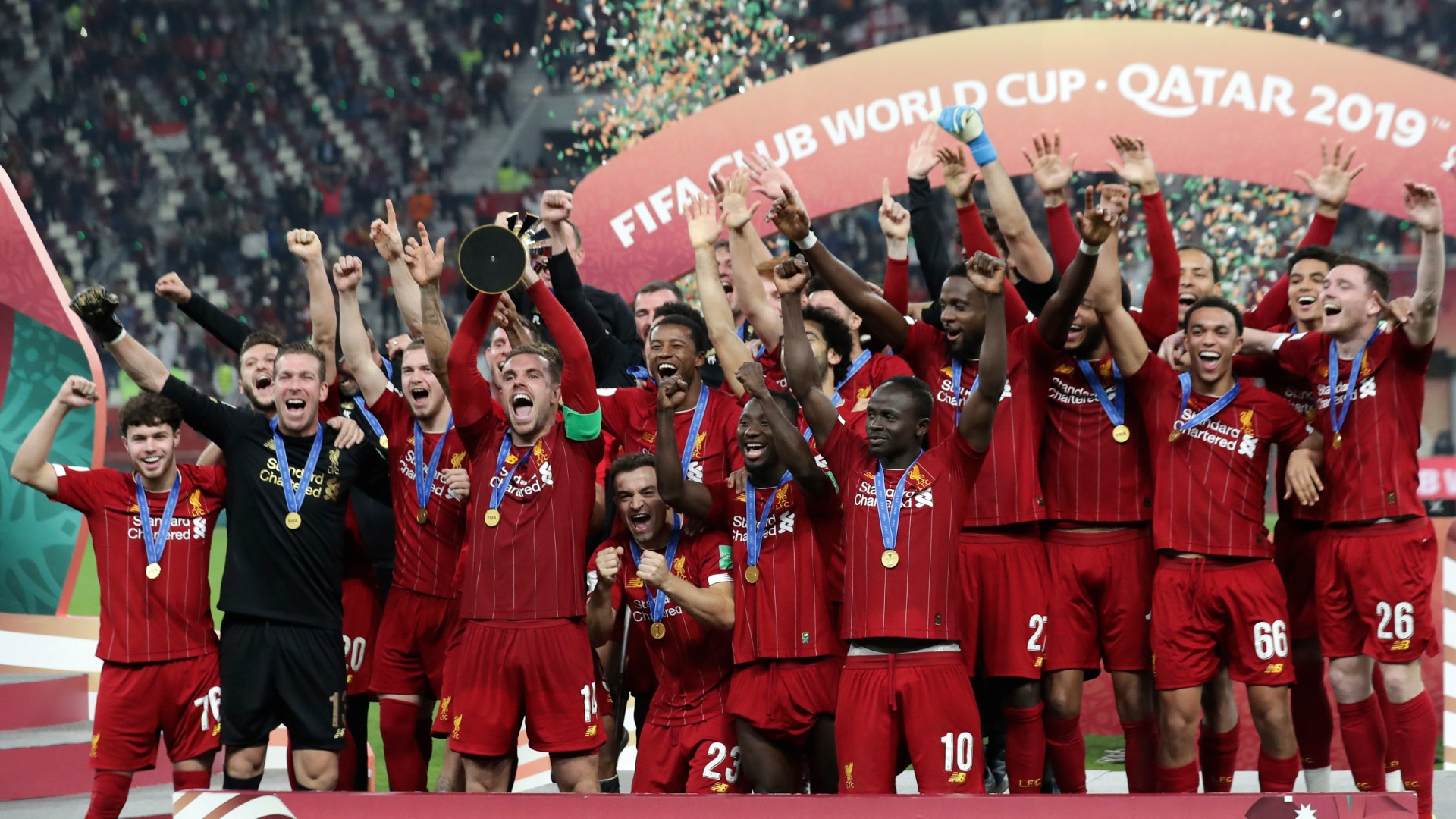 In the second decade of this millennium, European football came to rule the world in a way it had never quite managed previously.

True, it has long been the case that the top European teams have been able to attract the planet's best players, whether by cachet or cash. If anything, that migratory trend is strengthening: despite attempts from rich clubs in China and the Middle East, a handful of huge brand names are greedily gathering global talent into ever-larger squads.

Where the decade we must inelegantly call the 2010s differs from the others is in international football, which has witnessed an unparalleled European domination.

Barring 1942 and 1946, the World Cup has been held every four years since 1930. That breaks down nicely into three tournaments per decade, if we allow those held on the 'cusp years' ending in zero to tally towards both counts; it's a slight calendrical cheat, perhaps, but it gives a good indication of the longer-term trends, and they're only going one way.

Perhaps the pivotal moment in this clean sweep was arguably the decade's most extraordinary football match, one which somehow summarises South America's plight. On 8 July 2014, 390 million global viewers tuned in to watch Brazil - the tournament hosts and fabled five-time winners - play Germany in a semi-final they were expected to win. It's fair to say it didn't go to plan. Within half an hour Brazil were five goals behind. By the final whistle they were losing 7-1.

When Germany then defeated Argentina to win the World Cup for a fourth time, it may have pleased the parochialism of distraught Brazilians but it paved the way for a decade's domination of the World Cup by European nations, who have now provided the tournament's last four winners and three of the beaten finalists. In the 2018 World Cup, held in Russia, all four semi-finalists were European. Of the eight quarter-finalists, in 2010 three were European, in 2014 four, and in 2018 six. 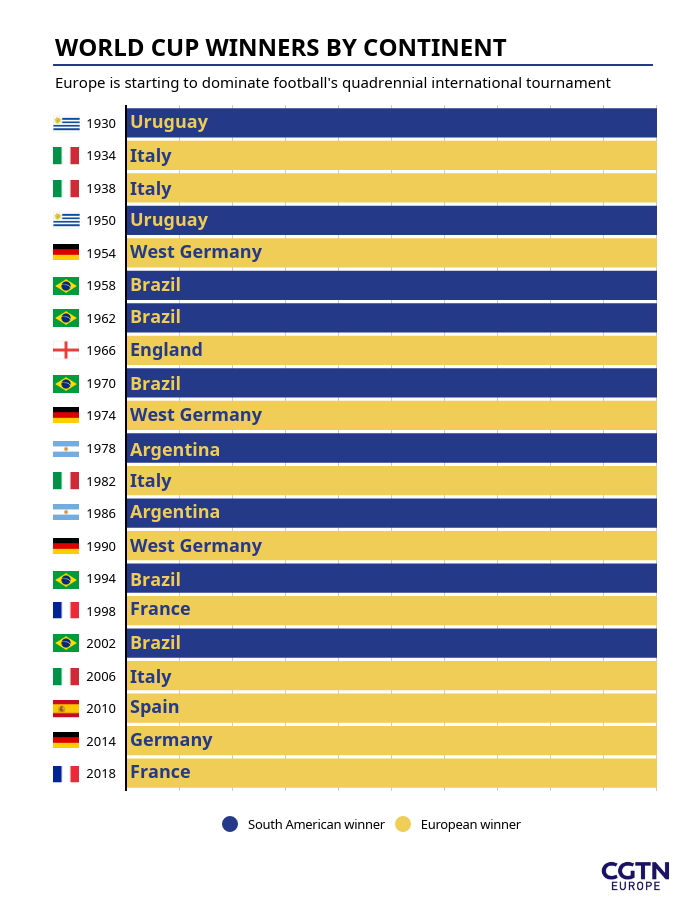 Players of the decade

That 2014 World Cup final defeat was particularly disappointing for South America's greatest footballing export of the century, the extraordinary Lionel Messi. Born in Argentina but spirited away to Europe by FC Barcelona at age 13, the 5ft 7in forward has played 521 games for the Catalan superclub this decade and scored 522 goals.

Messi has won football's highest individual prize, the annual Ballon d'Or, five times out of the last 10. Four of the other five were won by Cristiano Ronaldo, the Portuguese forward who has spent the decade in a globe-straddling shootout with his rival, scoring 477 in 490 games for Spanish aristocrats Real Madrid and latterly Italian giants Juventus while also helping his country to glory at the 2016 European Championships.

Those two stood head, shoulders, chest and torso above the rest of the decade's players, despite many of their nearest rivals being team-mates. Most top-20 lists would include Luka Modric, Gareth Bale, Marcelo, Eden Hazard and Toni Kroos, who shared a Real Madrid dressing room dominated by Ronaldo; they would also feature Neymar, Luis Suarez, Andres Iniesta, Dani Alves and Zlatan Ibrahimovic, all current or former Barcelona buddies with Messi.

Those same best-of lists would almost certainly not feature a single player who hadn't played in Europe, regardless of background. The Brazilian great Pele led his country to three World Cup wins in four tournaments between 1958 and 1970, but never played club football outside the Americas. Nowadays, any player who featured - no matter how brilliantly - in even the biggest leagues of South America, Asia, Africa and North America without testing his mettle in a European league would be regarded with suspicion.

There is a clear pecking order of clubs, with millions of young players worldwide dreaming of playing for Real Madrid or Barcelona, perhaps via Manchester United or Bayern Munich or a 'smaller' club in a 'minor' European league. Club football isn't a level playing field, it's a ladder.

With Messi now 32 and Ronaldo 34, the new decade will belong to other, younger players, but it's a fair bet that many of the new contenders will follow in their footsteps not just metaphorically but literally, by representing the two clubs those giants of the game have graced so brilliantly - and helped to dominate the decade. 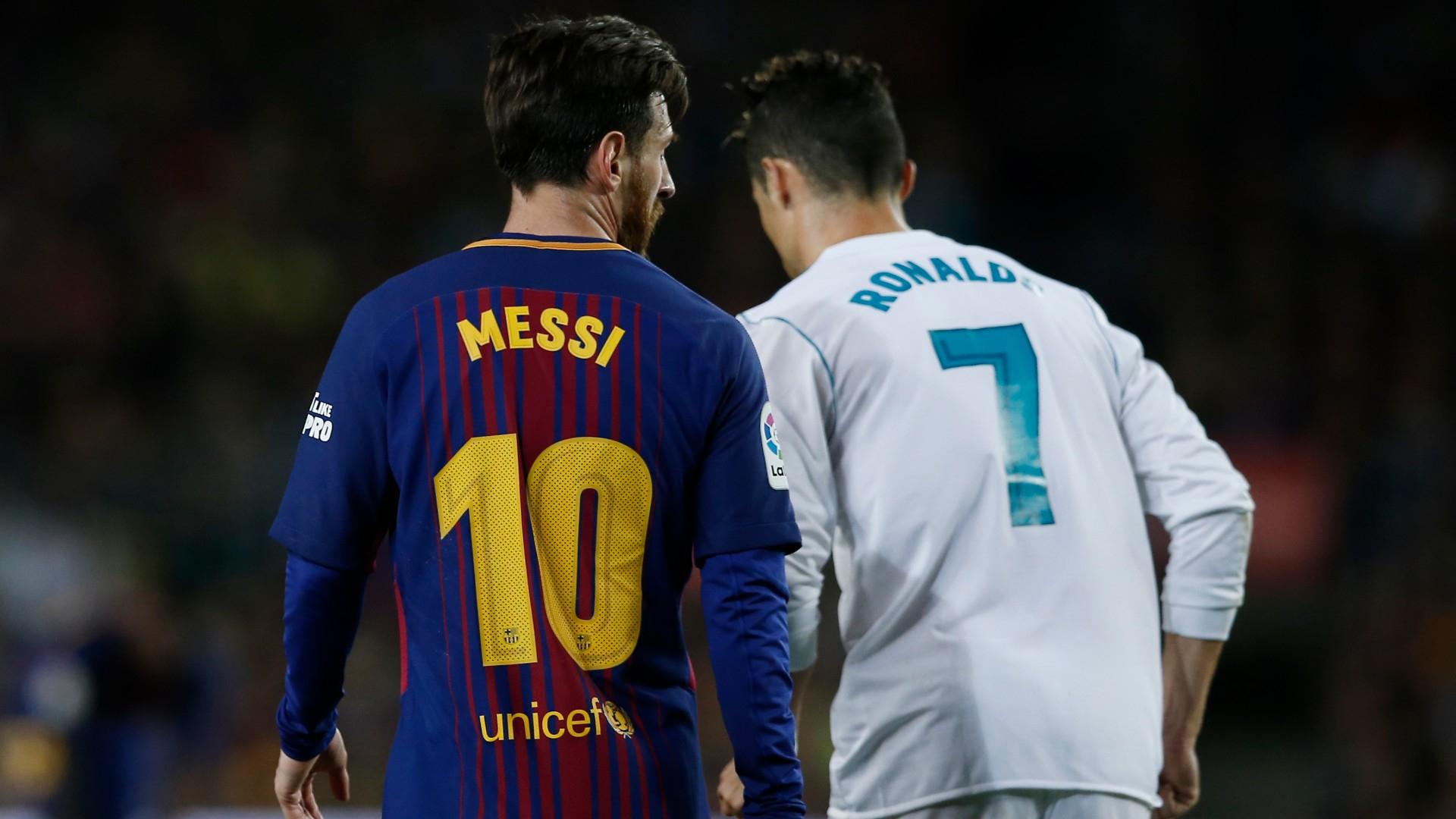 Clubs of the decade

Real Madrid and Barcelona have attracted such talent because they are truly huge institutions: Barcelona, who to some represent Catalonia itself, use the tagline Mes Que Un Club ("More than a club"). And success breeds success: between them, they have won seven of the last 11 finals of the Champions League, European club football's biggest competition, with Madrid winning four in the space of five extraordinary years.

It helps that the Champions League is gradually being refined to help the big names survive to the later rounds: the group stages, which the larger clubs have been attempting to expand, increase revenue and reduce the chance of isolated shock results eliminating the crowd-pulling, TV-tempting big-brand teams. But it also helps that these names regularly top another table, the annual Deloitte Football Money League, in which the renowned accountancy firm ranks global football's biggest clubs not by points and goals but revenue and turnover: a different type of net goal.

According to Deloitte's 2019 table, Real Madrid and Barcelona generate more money than any other clubs in the world. The same has been true for much of the decade, with occasional interjections from Manchester United and Bayern Munich, but it's worth noting the expansion within that decade.

On the 2010 list, Real Madrid's revenue was a table-topping $445 million, with Barcelona second on $405 million. By 2019, Madrid's revenue had rocketed to $833 million, Barcelona's to $766 million, and Madrid's 2010 total was surpassed by 10 clubs. These included Germany's dominant club Bayern Munich, France's nouveau-riche arrivistes Paris Saint-Germain and no fewer than six clubs from England's Premier League, where collective bargaining distributes the huge income from global TV deals more equitably than in some European countries' individually negotiated, every-club-for-itself land-grab.

Not only are these the richest clubs in the world - Forbes' May 2019 list values Real Madrid at $4.24 billion - but they're getting significantly richer, increasing their competitive advantage over the rest of the world. Deloitte's latest top 30 had no clubs from outside Europe, which now has almost untrammeled access to the best players, coaches and infrastructure. 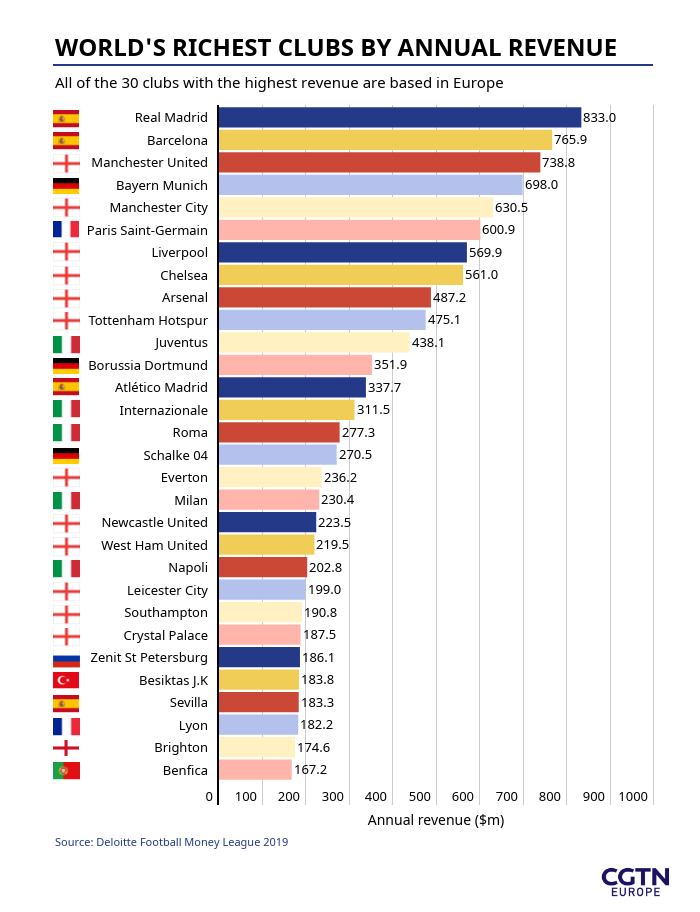 Europe 1-0 Rest of the World

And that's why European football has increased its advantage on the pitch. Around the turn of the century, football's global governing body FIFA - which runs the national teams' quadrennial World Cup - eyed the success of Europe's expanding Champions League and formulated the Club World Cup, an annual tournament between the champion teams of each continent.

The Club World Cup's predecessor, a straight Europe vs South America play-off called the Intercontinental Cup, was contested in 43 seasons and was always a tough one to call: South American clubs won 22 to Europe's 21. But European clubs have now won the last seven Club World Cups; the 2012 triumph of Brazilian side Corinthians, who scored with one of only two shots on target against Premier League side Chelsea, is the only non-European win in the last 13 tournaments. 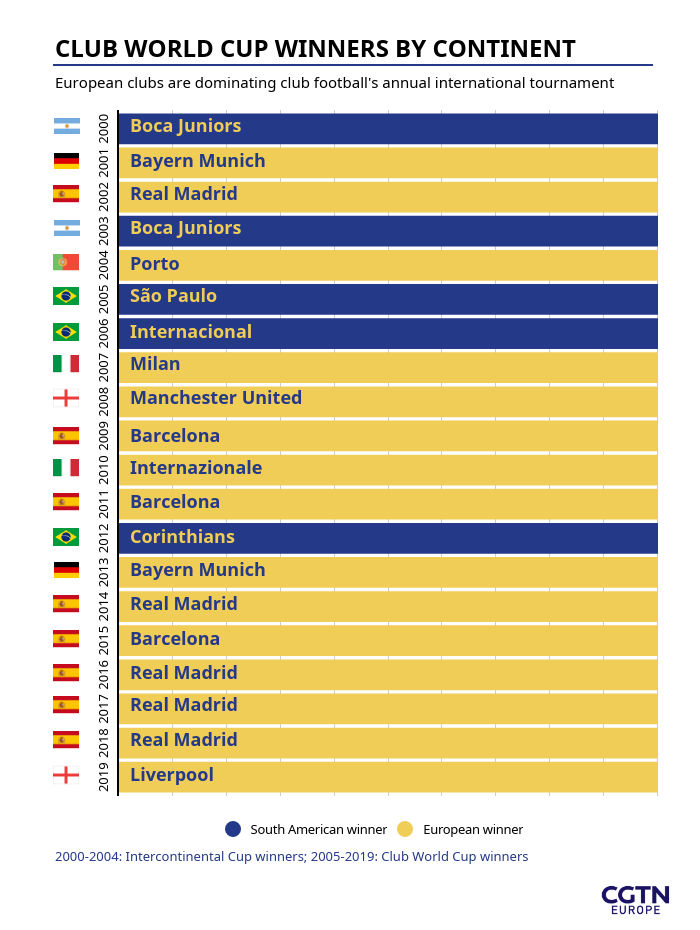 Planet Football is shrinking, and the talent drain is increasing: more and more of the world's brightest and best are circling in towards Europe, whether it's a thousand teenage "New Messis" lured from the streets of South American favelas, a similar number of African players moving to eastern European clubs to accumulate airtime and passport privileges, or a handful of the hyper-rich buying and boosting clubs with a growing global bootprint. The biggest clubs have ardent fans on several continents, wearing replica shirts, watching TV broadcasts and hoping that their heroes can be persuaded to undertake a money-spinning off-season tour to satiate that increasing global fanbase.

Whether its income derives from Middle Eastern oil states, Chinese investment companies, lucrative sponsorship deals, manipulative merchandising, gargantuan TV rights, ever-increasing prize money or a combination of these things - and whether their owners, coaches and players come from the continent or not - European football is now more dominant than it has ever been. How this trend develops over the next decade will have great ramifications for the planet's most popular sport.