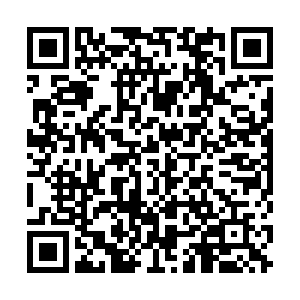 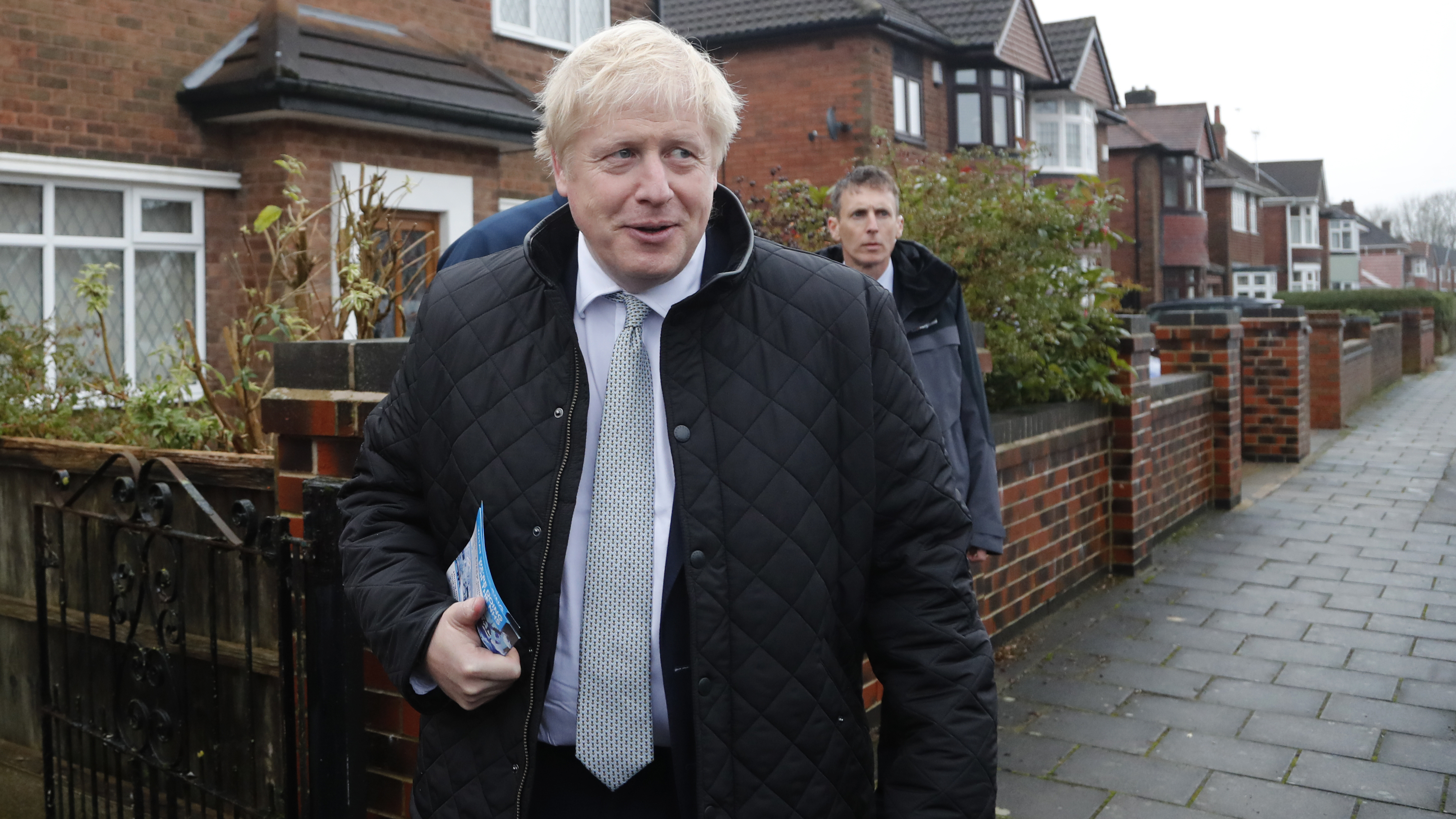 The Conservative Party announced on Sunday that freedom of movement – which allows EU citizens to travel, live, study and work in any member country – would end in the UK in January 2021.

The party said the "vast majority" of migrants would need a job offer to come to the UK to work, although it said there would be a "small number of exceptions" – for example, highly skilled scientists.

The Conservative Party also laid out other details of its plans for immigration after Brexit. The party said migrants will be treated equally regardless of where they come from, with the same rules applying to EU nationals and non-Europeans.

The cost for migrants to use the NHS would also increase, and the regulations on claiming benefits – which currently favor EU nationals – would change.

The Conservatives said that they want the "brightest and best" from around the world, and leader Boris Johnson said he would make an effort to reduce the number of so-called "unskilled" migrants coming into the UK.

But business leaders said that, instead of taking this approach, there is a need for workers of all levels.

Labour has not yet announced its immigration policy, but it is expected to be set out in the party's manifesto on Thursday.

The Liberal Democrats said they will focus on a "fair, effective" immigration system if elected - with plans to resettle 10,000 unaccompanied refugee children a year.

Regulations on claiming benefits will be "equalized," meaning that EU citizens would have to wait five years before they can access benefits, and they would not be able to send child benefit payments abroad.

The immigration health surcharge - which is the payment charged to migrants to use the NHS - would be applied to all migrants - both EU and non-EU, and would be raised from $516 to $806. 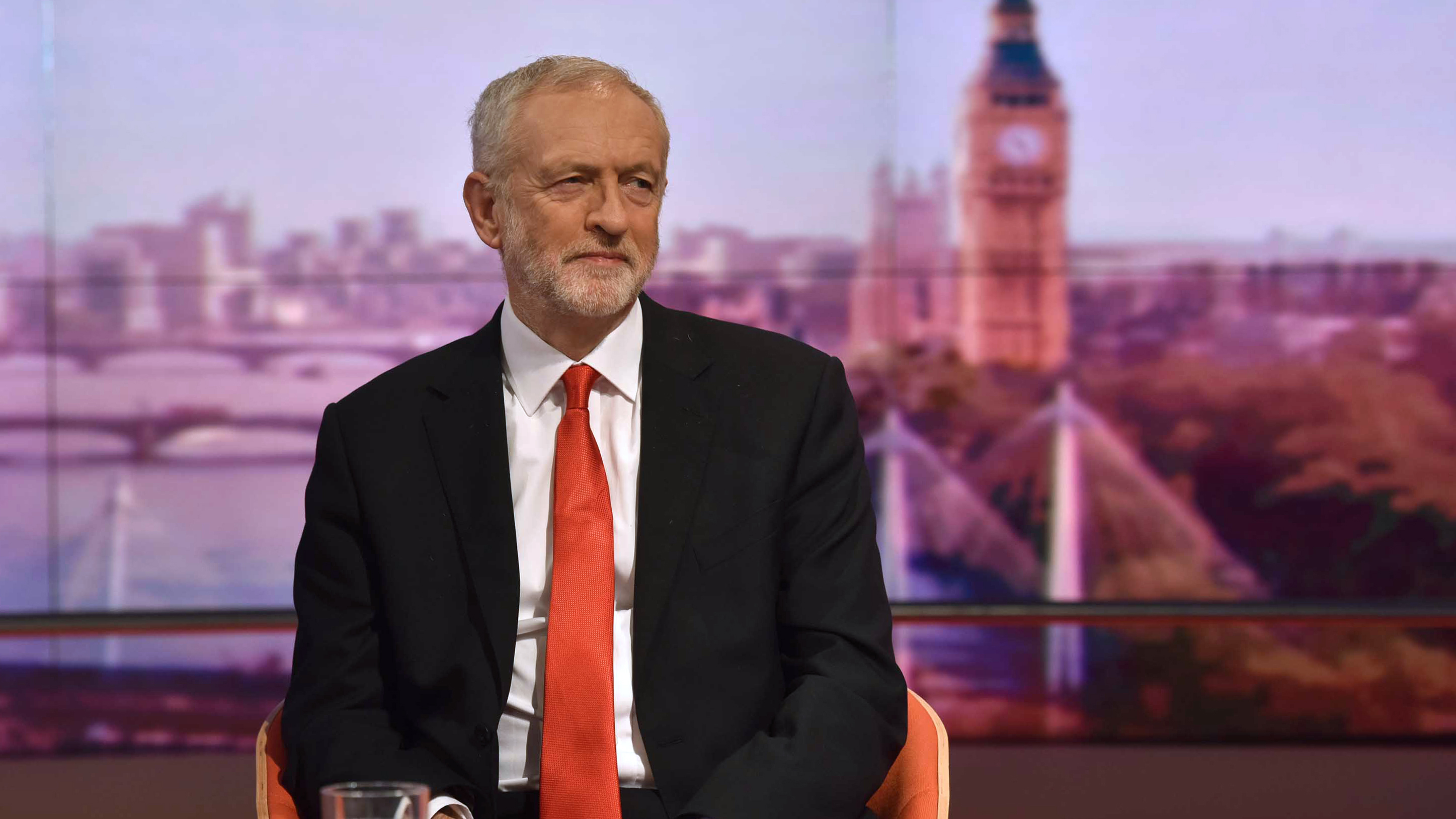 Labour said everyone will be entitled to a "free teeth MOT" in the UK under a Labour government.

The party is planning to scrap "band one dentistry charges," which cover a check-up, a scale and polish and any necessary X-rays.

Currently, people on low incomes, pregnant women, under 18s and under 19s in full-time education are exempt from charges. Approximately half of treatments delivered each year are provided free.

But the exemption system has been criticized for being overly complex and has been blamed for people getting fined for wrongly claiming free dental care.

Dental leaders have welcomed the "free teeth MOT" move, but have said the shortages of dental professionals is an issue that also needs to be addressed.

Labour leader Jeremy Corbyn said the policy – which would cost $580 million to implement – is "the first step towards making all dentistry services free of charge." 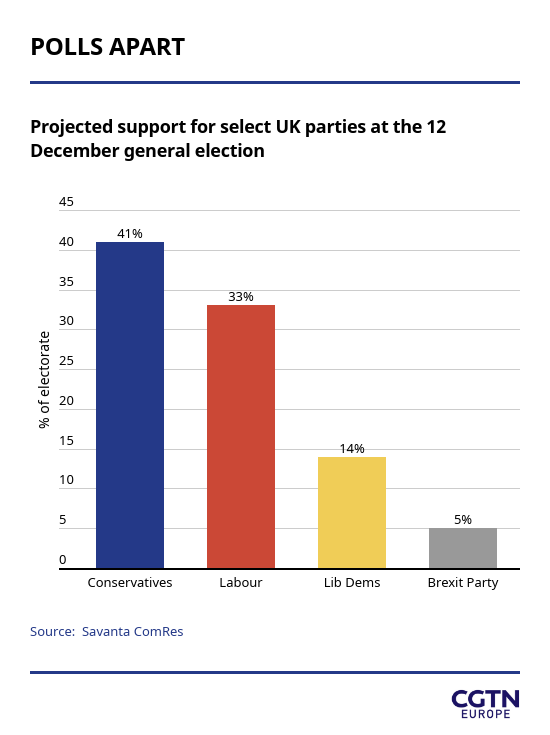 Support for the Conservative Party has hit its highest level for the party since 2017, according to the rolling average of opinion polls.

Support for Labour has also risen in advance of the December 12 general election, according to a Savanta ComRes poll.

The survey put the Conservatives at 41 percent on Saturday evening, up one percent from Friday.

Labour remained steady at eight points behind but rose three points to 33 percent, its highest level since April.

Support for Nigel Farage's Brexit party hit a new low, sinking from 7 to 5 percent after his announcement that he would withdraw candidates from seats won by the Conservatives in 2017 to help Boris Johnson deliver Brexit.

Support for the Liberal Democrats also fell – to 14 percent, after starting at 19 percent when the election was called.

These latest figures are released at a time when Labour leader Jeremy Corbyn said he has secured "unanimous agreement" on a manifesto that gives the "promise of a better Britain."

Labour rules out US trade deals involving NHS and medicines

UK opposition leader Jeremy Corbyn said the Labour Party will exclude Britain's National Health Service and medicines from trade deals with the US, as he accused Boris Johnson of concealing "secret talks" on the NHS.

In the UK's Observer newspaper, Corbyn wrote: "Boris Johnson is engaged in a cover-up of secret talks for a sell-out American trade deal that would drive up the cost of medicines and lead to runaway privatization of our health service."

He added: "Our public services are not bargaining chips to be traded in secret deals. I pledge a Labour government will exclude the NHS, medicines and public services from any trade deals – and make that binding in law." 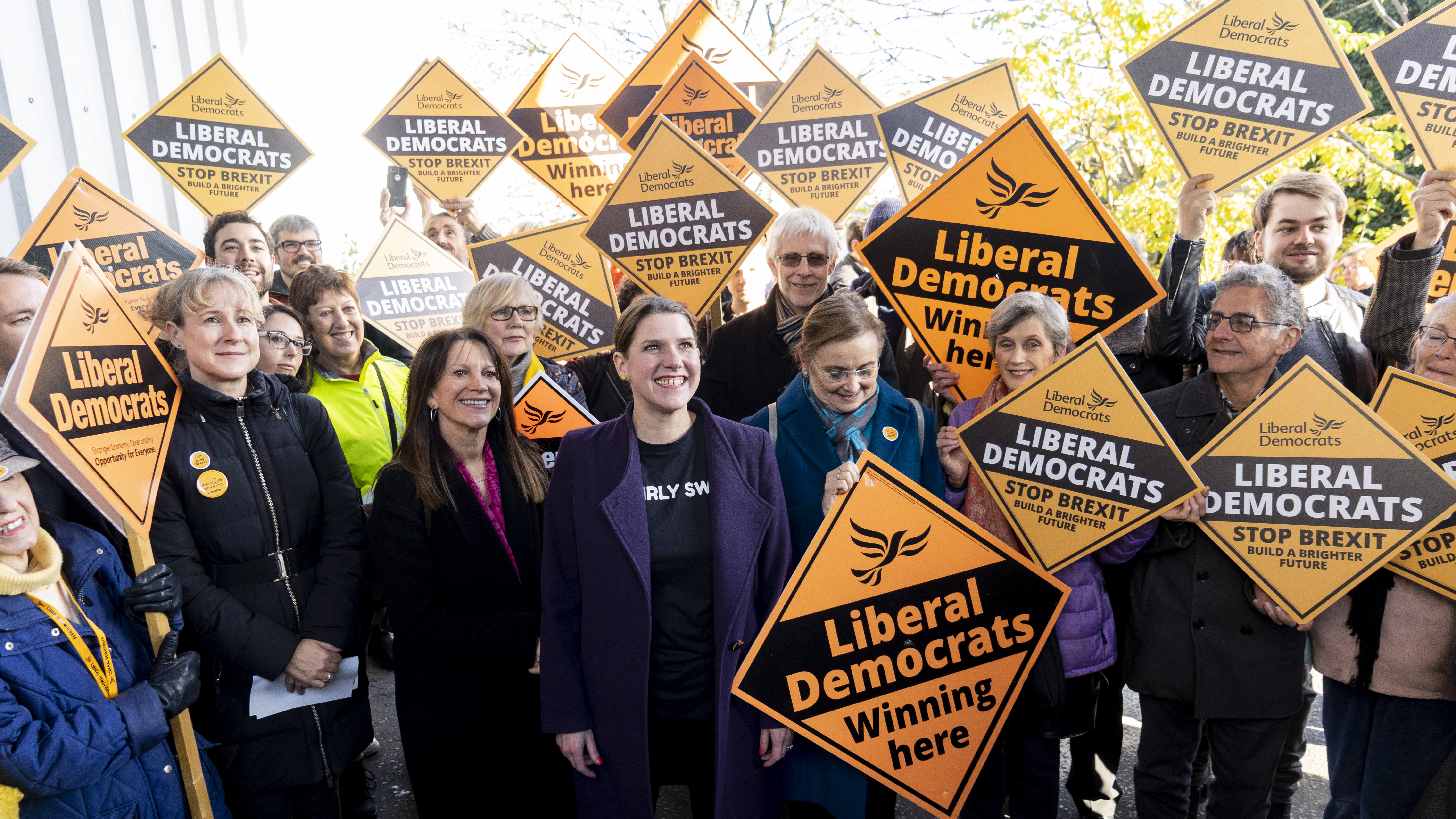 Liberal Democrats leader Jo Swinson with supporters as she leaves Total Boxer, a boxing gym offering training to young people to keep them away from violence. (Credit: NIKLAS HALLE'N / AFP)

Liberal Democrats leader Jo Swinson with supporters as she leaves Total Boxer, a boxing gym offering training to young people to keep them away from violence. (Credit: NIKLAS HALLE'N / AFP)

The Liberal Democrats have said that they will launch an economy-wide program to tackle the climate emergency across a five-year parliament. They said they will spend an $129 billion of public finance on climate action and environmental preservation.

The plans incorporate a $13 billion Renewable Power Fund and, according to the party's website, the plans "will fast-track deployment of clean energy, to make Britain not just the world leader in offshore wind, but also the global number one in tidal power, too."

The party also said it will invest in every building in the country to make it greener, and will incorporate an emergency 10-year program that focuses on saving energy, ending fuel poverty and slashing heating bills. 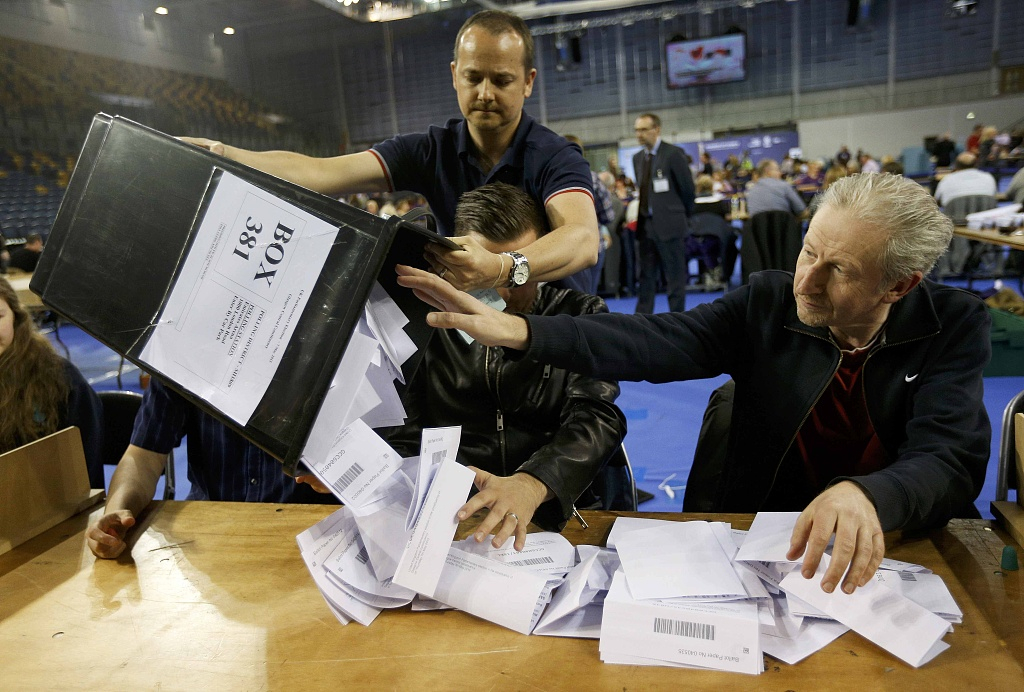 A ballot box is a sealed square box or tamper-resistant bag, into which voters put their completed ballot papers. There is a slot in the top which can accept ballot paper but prevents anyone being able to access the votes cast until the voting period closes.

The word ballot comes from the Italian world ballotta, which means ball and dates back to the mid-16th century. Wooden balls were used to cast votes in gentlemen's clubs, where each member would audibly drop a ball into a box. White was in favor and black was against. Onlookers were not able to see which way the individual had voted but were able to hear the ball drop.

The ballot box is known as a symbol of democracy now but when the concept was first introduced to the UK in the 1872 Pontefract by-election, it was considered by some as un-English and un-manly (voting was still restricted to men at this time).

Reports noted how the ballot box was a civilized change from the previous method of voters publicly announcing who they were backing, often when they were drunk and in public spaces.

UK law states: "Every ballot box shall be so constructed that the ballot papers can be put in it, but cannot be withdrawn from it, without the box being unlocked.”

The box has changed relatively little since 1872 apart from now being plastic instead of wood and the wax seal being a numbered zip-tag.